Ryan Couture Understands His Last Name Is The Draw

Share All sharing options for: Ryan Couture Understands His Last Name Is The Draw

Ryan is exited for his pro debut on Friday but clearly understand there's only one reason why he's on the main card.

"I think it's absolutely because of my last name and selling tickets," Couture said on Wednesday during a pre-fight workout session.

"It's not like I've paid my dues as a pro and have a solid pro resume to justify putting me on the main card. It's a business thing and the name gets a lot of attention. That's just a fact of life at this point. There are going to be people who are bitter about that and hold that against me but there's nothing I can do about that."

He said repeatedly how happy he is with the matchup. And he should be.

Lucas Stark, a 20-year old with a limited and unimpressive 2-4 amateur record likely wasn't chosen to face Couture so he could give the big-name youngster too hard of a test. Is he a patsy? We will have to wait for Friday to find out for sure, but he clearly isn't a big reach for Ryan either.

Ryan said he liked the matchup because of Stark's tendency to get the fight on the ground where Couture won all of his previous fights. In this bout however, Ryan says he wants to show off the stand-up kickboxing skills he's been working on for the past two years and thinks he has an advantage there.

The two meet this morning. "He seems like a nice kid but that's not going to stop me from punching him in the face," Ryan said.

Couture grew up a fan of MMA and enjoyed watching his famous father compete. After college he took up training to stay in shape but never intended to make a career in the ring. He worked at a bank in Washington before "dad" called him to Vegas to work in the family business. Even then, he intended to work on the business side and train for fun but he said that being around the fighters and training at a higher level convinced him to give it a try.

After his first fight in the ring he was hooked.

"I was a little apprehensive because I knew there would be extra eyes on me because of my last name but I was just in love with it so I had to do it anyway," Couture said.

Randy is a resource for his son and mostly hangs back and lets Ryan come to him for advice or guidance.

Couture the senior, is training this week for his own fight but will be in Phoenix to corner for Ryan come Friday. 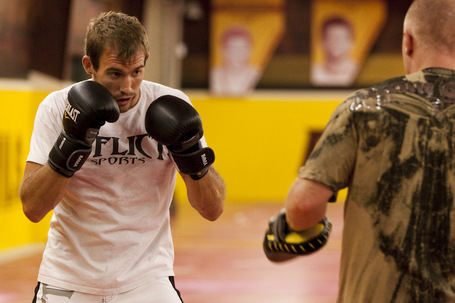