Share All sharing options for: Joe 'Diesel' Riggs On His Break Up With Arizona Combat Sports And His Future In And Out Of The Cage

Joe "Diesel" Riggs has been in the MMA game for a long time but he's seeing the end of the line. He had his first fight as a high school student in 2001 and even though Riggs is entering his prime, he'll be ready to get out when he feels his body start to deteriorate.

"Three more years, four more years. I'm not going to be fighting until I'm 35 or 40," Riggs told SB Nation Arizona at a pre-fight workout today. "I'm 27 but I'm an old 27. I've been been a pro since I was 17 and I've got like 50 fights so I want to make one more run and see what I can do at it and I want to gracefully bow out. But I've got four or five more years or something like that."

He did have a problem with Sarah Kaufman who recently complained about the promoter, "I don't know what that girl is talking about. She's lucky to even be on TV."

Riggs is fine with women competing in MMA and said they are exciting - to a point. "As long as they don't say things like they don't want to be on the Challengers card and they want to be main events, then they're good," he said. "We're the show. The men are what people are here to see."

Riggs recently left Arizona Combat Sports in Tempe and talked about the break up.

"Trevor (Lally) is a trainer, he's not an agent and he didn't understand that and he wanted 20 percent of our money," he said. "I make more money than those guys and 20 percent's a lot of money in my purse so we offered him 10 percent. Why would we go give 10 percent for another agent. He said, '20 or nothing' and he wasn't going to train anybody that he didn't manage so we had to take a walk. That's how that went."

Riggs has mostly prepared for this fight in the same boxing gym in Phoenix where he's trained since he was 10. He's considering going out of state to train in the future and mentioned Jeremy Horn in Ohio as a posibility.

Once his career in the cage is over, Riggs has a whole new line of work in mind.

"I want to be a cop actually," he said. "I want to get into law enforcement and go that route. After this fight I want to enroll in the police academy at Glendale Community College and get the ball rolling there so it's an easy transition from fighting to that."

If a fan wants an autograph from the famous cop who pulls them over, "That's fine. I'll sign the ticket and their piece of paper or whatever they want."

Joe is confident about his match with Taylor but admitted the pressure was on him.

"In all likelihood I walk in there and one punch and the guy goes out and that's it. But you never know. I always train for the worst, expect the worst, but hope for the best. In this sports there's so many ways to lose," Riggs said.

"I think (Taylor's) athletic, he's got heavy hands, he's got a lot of ability but he hasn't had a lot of fights. He's got nothing to lose. I'm the one who's got a lot to lose. I think that's were all the pressure lies, fighting in front of my hometown, in front of all my local fans, friends and family. You don't want to look like a jack-ass out there so yeah, there's always pressure."

Riggs expects Dodge Theater to be full on Friday night and has a stake in that happening. He's in line for a $10,000 bonus if the sell out happens. 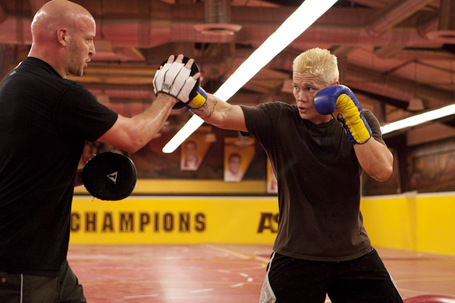 Riggs getting in a little pre-fight work. Photo provided by Strikeforce.