MMA women's champions Cris Cyborg Santos and Sarah Kaufman will be in Phoenix for Friday's Strikeforce Challengers event. Both Cyborg and Kaufman will be signing autographs for fans at the official weigh-in, which will begin at 5 p.m. local time at Dodge Theatre, tomorrow/Thursday.

A draw to determine the semifinal matchups for the two-round tournament will take place at the weigh-in on Thursday. The tournament winner will become the official No. 2 contender in the STRIKEFORCE women's welterweight division and will face Kaufman for the title in a future match.

The winners of each semifinal bout on Friday will face off in the tournament final later that night, just before the main event matchup between Joe "Diesel" Riggs (32-12) and Louis Taylor (6-1) that will be fought at a catch weight of 182 pounds.

"I think it's a real interesting concept," said the undefeated Kaufman. "It has to be tough to have to train for potentially three different opponents. But at the same time when you train you should be training everything anyway. Hopefully you're at a level where you can tweak what game plan you are going to go with."

Kaufman said she expects to see all for women use their ground fighting skills and that there isn't a dominant striker amongst the four. She sized up each of the four women who will fight on Friday:

MIESHA TATE: "She's definitely known as a wrestler. I think all the girls will use their wrestling but I think Miesha especially will use the entire cage and angle for the takedown and try to get a finish and control from the ground."

CARINA DAMM: "She is known for her unorthodox striking. She is coming up in weight so it will be interesting to see how she does against the heavier girls. She does a lot of showboating and uses some Capoeira. I think she uses that to mentally throw her opponents off. So we'll see if she uses that. I'm not really sure where her strong suit is but I would say it's on the ground."

HITOMI AKANO: "She has amazing judo and I know she works with Josh Barnett. All the Japanese girls are tough competitors and just don't quit. So I expect Hitomi to be tough to beat."

MAIJU KUJALA: "She's probably the best striker of the group. I haven't seen a lot of her and she remains the mystery girl of the four. She has described herself as a slow fighter so I'm interested to see what she'll bring to the cage on Friday."

More on each of the four fighters in the tournament: 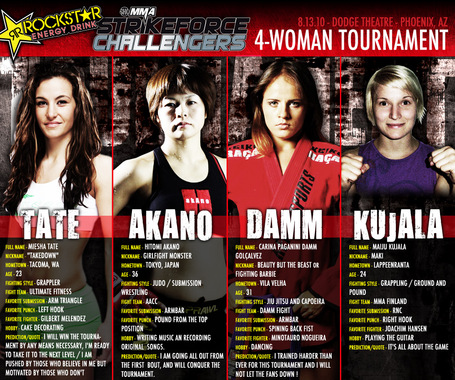 And if you haven't seen this fight between Cyborg Santos and Gina Carano, it's considered the best women's MMA fight ever.