Prices On Some U of P Stadium Food Going Down in 2010!

Share All sharing options for: Prices On Some U of P Stadium Food Going Down in 2010!

At tonight's pep rally for new stadium employees, those in attendance were treated to a somewhat comedic performance by KTAR's Ron Wolfley and Paul Calvisi. Wolfley didn't say "Basinonians," to this writer's chagrin, but did crack on Calvisi's Goose Gossage mustache.

It will cost fans $6.75 for a souvenir cup with soda, but there will be a separate line for refills which will only be $1. A 128-ounce souvenir popcorn tub is $7 with a $1 refill. And you can get three reduced-priced value meals: For $9.75, its chicken strips or a cheeseburger with fries and a soda, or a Red dog, fries and soda for $8. 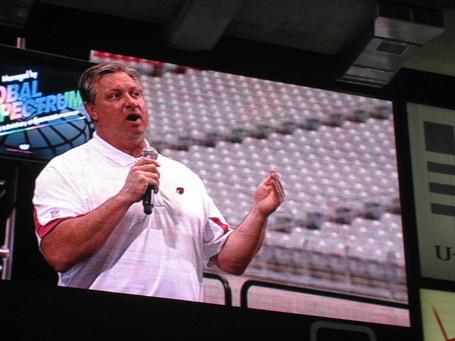 Wolfley is entertaining. He and Calvisi came from Cardinals training camp in Flagstaff for the event.

Other highlights of tonight's event at the stadium:

-Team president Michael Bidwill got cheers when he told employees that dinged-up running back Beanie Wells is feeling better.

-U of P Stadium is one of 18 finalists as a possible venue for a World Cup match should the U.S. win its bid for the big event in 2018 or 2022. FIFA, the governing body of international soccer, will announce the winning nations in December.

-The stadium is bidding for a monster truck show next March, and is looking into hosting a potential Pac-10 championship game after the league expands by two.

-Free food and beverages, raffles and an appearance by the Cardinals cheerleaders. 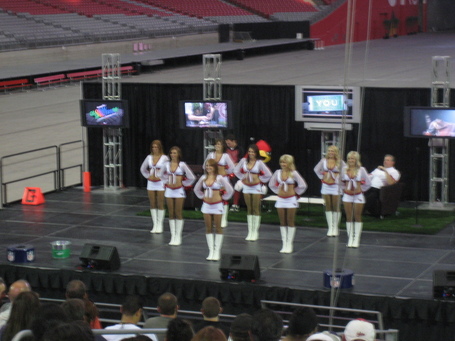