Strikeforce specializes in finding local talent for their events and Ryan Couture's first pro opponent fits the bill. Lucas Stark (2-4 MMA, 0-0 Strikeforce), a 20-year-old based out of Chandler's Rage in the Cage gym, has racked up a handful of Jiu-Jitsu and MMA fights since his first bout at the Celebrity Theatre in Phoenix eighteen months ago. Now he will take on Randy Couture's son in his MMA debut Friday at Dodge Theater in Phoenix. 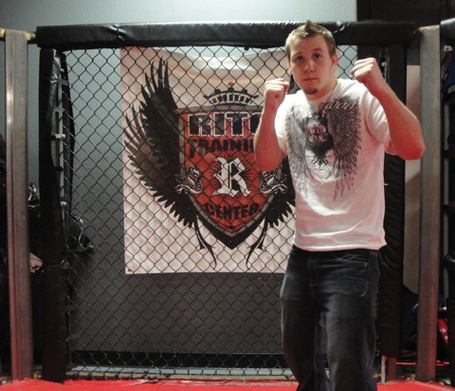 Stark, a native of Red Oak, Iowa, came out to Mesa for his senior year of high school (Mesa Dobson), where he wrestled at 145 after coming off an fracture to his L4 vertebrae back in Iowa that held him out of sports for over a year and threatened to keep him out of any kind of competition permanently. "I was never supposed to play sports again," Stark said in an interview with SBN Arizona. "It took so long for my back to heal... it never completely healed. My bone just capped off and died." Focus on core support has helped keep back issues from recurring.

Stark is defined by action. He doesn't own a game system, preferring to head outside. In his free time, he skydives, camps, hikes, and runs the South Mountain. "Parties (too)," adds Stark with a sheepish grin.

This might go a long way towards explaining why he wasn't an MMA fan until his trainer turned him onto Rage in the Cage's gym. He attended his first live fight when he entered the ring for the first time. "I never really watched it until I started doing it," shrugged Stark.

Because of this unstated credo, Stark has barely watched film on Couture despite having a distinct advantage of having tape on Couture but not vice versa. Instead, he's focused on his own skills, developing a love for Jiu-Jitsu. "I didn't want to learn it," Stark explained. "I didn't like it. I didn't want to be on my back. (But) why (was) I being submitted so much? Coach said, 'Well, dummy...'. Now I love Jiu-Jitsu." He's won Desert Quest, a local grappling/Jiu-Jitsu tournament hosted by Rage in the Cage, twice since picking up the style.

His rise to a Strikeforce main card came rather swiftly. Eighteen months into his career, he got the opportunity a month ago to join the undercard for a Strikeforce fight and then heard about an opening to fight Ryan Couture three weeks past. "I threw my name out there (when I heard)," Stark noted. The gig was his and he shot to the PPV portion.

There's not much left for Stark to do before the fight. He was almost at the fight weight of 155 last week; he won't struggle to lose fluids before Thursday's weigh-in. His attitude is set as well: "I always fight to win; losing's not an option. We're going to have a game plan and we'll stick to it." He wouldn't grant Couture a single edge from experience (many more amateur fights), age (six years' difference), or training (the Couture gym, fortune, etc.).

Ryan Couture told MMAjunkie.com roughly the same story this week: "I've been able to prepare really well apart from the fact that I didn't know who I was fighting until a few days ago. But really the way things are at this level starting out with how little tape there is on an opponent, it wouldn't have made a huge difference in training, anyway."

"I've just been focusing on my strengths and getting myself in the kind of condition that I need to be in to go three hard five-minute rounds, and what will happen will happen from there."