Share All sharing options for: Edwin Jackson Rumored To White Sox For Salary Relief, Bag Of Peanuts, Slap On Ass

On a KTAR radio appearance yesterday morning, Diamondbacks CEO Derrick Hall was candid about the teams motives for additional moves that he promised would be likely (maybe) coming this week:

Hall also said the team would be making some moves in the next week just with the purpose of clearing payroll so that the team can spend money after the season to improve the bullpen.

"There's going to be another move or two that's definitely appears to be such. We're freeing up the flexibility financially so that we can change this team for next season. There's going to be a lot of moves that we need to make in the offseason," said Hall.

Hall, if nothing else, would be a man of his word if this reported deal with the White Sox goes through sending Edwin Jackson to Chi-town for 23-year-old right-handed pitcher Daniel Hudson and perhaps another prospect.

Jackson is slated to make $8.75 million next year while Hudson might be owed free socks (this can't be confirmed).

Then again, there's this tweet from Joe Cowley of the Chicago Sun Times:

I suppose the D-backs feel like paying Edwin Jackson almost $9 million in exchange for his 5.16 ERA is a bit wack, but who can forget the one bright spot of this entire season - Edwin's no-hitter. 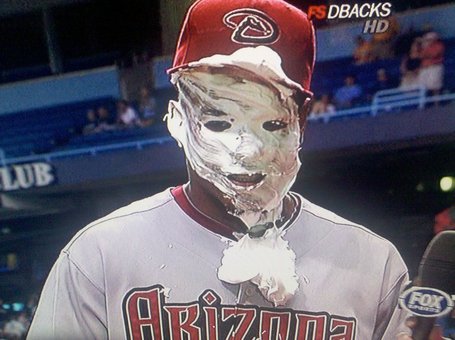 The Diamondbacks are also try hard to move Chris Snyder ($5.25m) and Chad Qualls ($4.185m) as well, but as crappily as those two guys have played this season it will probably require some kind of bribe and/or extortion to get another team to take either one.