Coming To You From The Land Down Under

SB Nation Arizona's Jose Romero might not be able to keep up with American sports for a few more days, but he's getting his sports fix far away from home in Australia.

Share All sharing options for: Coming To You From The Land Down Under

G'day, mates in Arizona and the States (and anywhere else this is read).

As I sit here in a McDonald's in Parramatta, New South Wales, Australia at about 3:30 a.m. Phoenix time on Tuesday; my Tuesday is already over. It went something like this:

A visit to the Sydney Aquarium, checking out the sharks and sea life -- even the rare duck-billed platypus, which I read can only be found in Australia. Then a walk to the Wildlife World nearby to see the kangaroos, koalas, wallabies, kookaburras, assorted species of bugs, wombats and a huge crocodile. Then a $10 lunch of steak, fries (chips, as they are called here) and salad, and finally a trip up the AMP Centrepoint Tower in downtown Sydney, the city's equivalent of the Space Needle in Seattle.

I've been in Australia since last Friday, and have enjoyed touring the Sydney area and the Blue Mountains outside of town. Sports in this part of the country is all rugby, for the most part. The pro soccer regular season has yet to begin, though I did pick up an Australia national team jersey from the World Cup, and Australian Rules football is also going on, but Sydney has only one team.

In search of a sporting experience in Sydney, my soon-to-be in-laws took my dad and me to a major-league rugby match at a place called the Leichhardt Oval, home of the Wests Tigers, on Monday night. The home team was facing the North Queensland Cowboys, a team from another state in Australia, and if you think these Cowboys have a star in their logo, you are correct, sir. 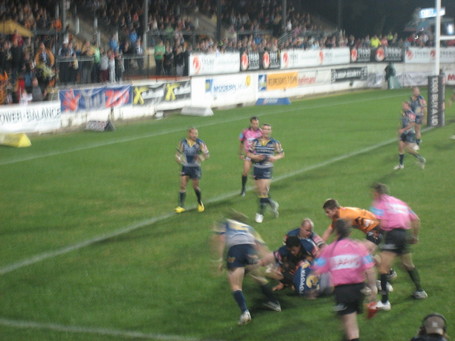 The experience was really something. The stadium is small and located in a residential area, kind of like Hohokam Park in Mesa -- where the Chicago Cubs hold their Spring Training games -- except it's right near water, like a lot of Sydney. So parking is at a premium and we got lucky there. There is a fire code and no smoking, I'm told, but people were smoking and standing in the aisles. We had to stand on a grassy berm. 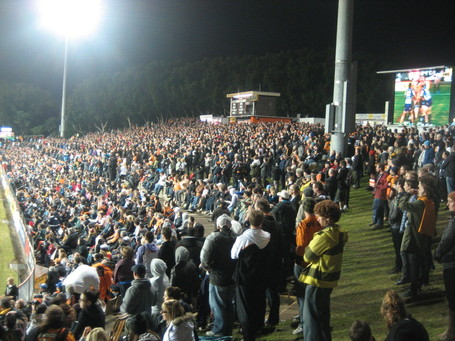 Games are 80 minutes -- two 40-minute halves -- and the action is pretty much nonstop and violent. No pads of any kind. You get the ball, you run with it, get hit and tackled and then you back-heel it to a teammate who does the same thing until one team scores or loses possession.

The Tigers (orange and black) started out flat and trailed 16-4 at halftime, and the fans were not happy. A player of what I determined to be Pacific Islander descent was running side to side a la Shaun Alexander instead of north-south when he got the ball, and an unhappy fan behind us shouted, "Run it straight, ya damn coconut!" Hmm. That just wouldn't fly in the U.S. thank goodness.

Another fan called a Tigers player a "maggot" and later labeled his team's play "rubbish." But the Tigers won their crowd back with a second-half rally.

Wests scored six tries for 24 points (4 each) and added the equivalent of one PAT in the NFL, a two-point kick. They went on to win 26-16.

Sports are pretty big here. The Aussies aren't much into American sports but they love their rugby and cricket and are pretty active as a population. And the diversity of nationalities and ethnicities is a sight to behold.

Europeans, Polynesians, Asians, Middle Easterners, Persians and a few Aborigines, plus more. It has been quite a trip for me, one I didn't think would happen so soon in my lifetime.

I'll be back in Arizona this weekend. One more thing...temperatures are in the 50s here on average. Aaaaaahhhh....winter chill -- that's me on the left. 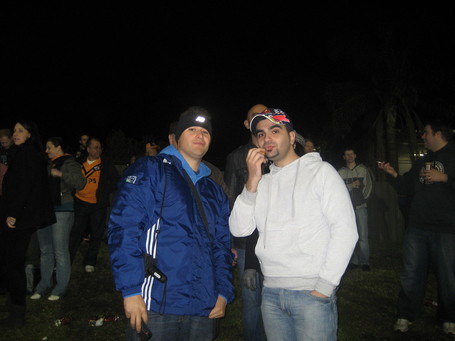