Watching Kirk Gibson Hand It To His Former Team

Share All sharing options for: Watching Kirk Gibson Hand It To His Former Team

Ah, what a night under the stars, er, roof (there I go daydreaming about Safeco Field again) of Chase Field watching the dawn of the Kirk Gibson era Friday night.

First impression when I arrived at the ballpark with my wife: Few of the 23,155 in attendance seemed to care that the Diamondbacks had changed managers and GMs. We took our seat and not long after, the Gibby-backs began their dismantling of Hiroki Kuroda and the Dodgers.

I'm watching this game and seeing the D-backs put up nine runs in the first three innings and I'm thinking, "This is the same Diamondback team A.J. Hinch managed, right?" Notable difference: Chris Young in the leadoff spot. Hinch had Young in the fifth spot. Score on for Kirk, at least in his managerial debut: Young went 3-for-5 with a three-run shot and 5 RBI.

As always, a ton of Dodger fans in the house but plenty of brave Sedona red souls chanting "Beat L.A." when their team was up by seven in the eighth inning. Honestly, it seemed like Arizona fans came more for the chance to razz all the Dodger blue invaders than see the Gibson debut.

Gibson never came out to the pitchers' mound, as the Arizona bullpen allowed just one run over four innings. Wait, same D-backs pen, right? I guess there is something to be said for trying hard to win for the new manager. Boy did the Diamondbacks respond.

Things may not get much better for the Diamondbacks, still far back in last place in the NL West, but for one night, it was just how they hoped so many others would go this season. And something to feel good about after all of the upheaval of the past couple of days.

Photo from my seat right down the first base foul line - That's Gibson in the center of the receiving line, two guys over from the dude with the TV camera. 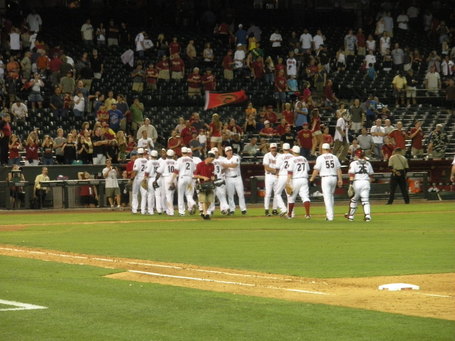