Lil' General Hired To Coach Nets ... Does This Affect Amar'e?

Share All sharing options for: Lil' General Hired To Coach Nets ... Does This Affect Amar'e?

So, word's coming out around the interwebz today that former Dallas Mavericks drill sergeant Avery Johnson has accepted the Nets coaching job.

What does this mean for opt-out king, Amar'e Stoudemire?

Well, if he's anything like anyone who was on the Mavericks from 2005 to 2008, or anyone who's watched ESPN since Mark Cuban fired Avery, then STAT likely wants to avoid ear drum destruction and steer clear of Johnson's shrill play calling.

This image clearly demonstrates the affects of exposure to Johnson's maniacal shouting: 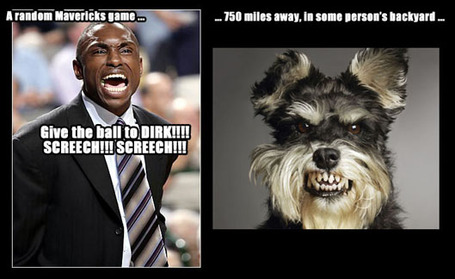 Why would Amar'e want to subject himself to this? He wouldn't.

So does this scratch the New Jersey Nyets off the list of potential landing spots? If so, this news, combined with the previous news that the Heat might be out of the running, would seem to indicate that the chances of the Phoenix Suns retaining Amar'e might be strong.