A handful of migrants from Canada and the northern United States gather in Phoenix to keep curling, their native sport, alive and well in the desert.

Editor's Note: SB Nation Arizona is spending its summer vacation exploring how some local desert dwellers spend the hot months staying active, often attacking the weather instead of shirking it. The Summer Sun Series will stretch across the Valley of the Sun, telling the tales of those people for whom triple-digit temperatures are less an impediment and more of a dare.

It's 6:30 in the morning on a typical Valley Saturday. It's already 85 degrees on the way to triple-digit temps and you've got about three hours left of productive outdoor time. As an active Arizonan, though, you can't resist the call outside your door. So you strap on your sneakers, throw on some old clothes, and head down to the ice rink to toss a few stones down the ice in a curling match.

Thanks to the efforts of a few Canadian-born local enthusiasts in the past eight years, you now have the chance to lead the northern life in the desert if you visit the Alltell Ice Den in Scottsdale. There, a small enclave of hardcore curlers will welcome you into their world of rocks, houses, and brushes.

It starts at 7 a.m. with a donut offered to you with Canadian hospitality by Darryl Horsman, one of the directors of the Arizona Coyotes Curling Club. (Sadly, it's not a Tim Horton's donut, but it is free.)

You're joined by a collection of 30 migrants from colder climes and born-and-raised Arizonans aged 14 to retired and even possibly a couple people in wheelchairs, all looking for a refresher course in Canada's other national sport or their first opportunity to shout "Hurry hard!" unironically.

Your first moments inside the rink are spent learning the basics from Daryl and weakly attempting those stretching exercises you vaguely remember from that book you bought when you were sure you would never waste a gym membership. 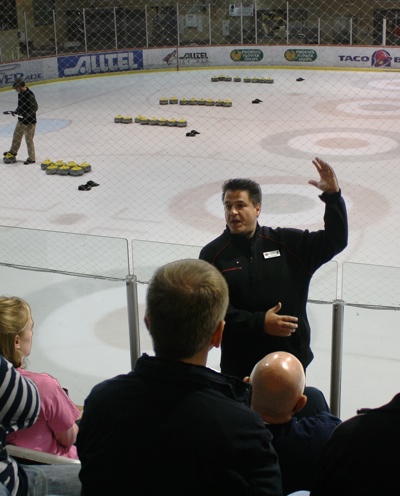 Horsman, who moved to the area around the same time the club started, tells of sitting in a local bar and overhearing a conversation about starting a curling club and being unable to resist interrupting the other party, having heard the secret handshake of Canadians in a foreign land: the lure of the curling sheet. Today, he acts as one of the directors and leads the Learn to Curl sessions, acting as an evangelist for the curling cause in the Valley.

The first fact you absorb is that, unlike hockey, curling is not a Canadian invention. Instead, curling itself is a migrant from Scotland, where people's fascination with the friction coefficient of frozen water joined forces with people's fascination with competition roughly 500 years ago. From there, Canadians will happily tell you how they rescued the sport from those Scots and gave it a proper home.

Housekeeping for curling has become rather complicated since its early days, when preparation consisted of carving out a few circles and gathering up your favorite hefty rock and your home's broom. While Daryl tells you the best way to avoid slamming your noggin on the ice, that ice gets specially treated for curling.

The house and other lines and circles must be drawn and then covered with ice. The ice has to be pebbled with water droplets to create those air hockey-style bumps you take for granted outside but are generally avoided in hockey rinks. Starter's blockers (called "hacks" in curling parlance) have to be glued to the ice with more ice. Brushes (lighters brooms with more surface area that can run up to $150) and standard 42-pound stones have to be dragged from storage and scattered around the ice.

There's no dedicated curling ice in Arizona, not yet. The Arizona Curling Club has dreams (nearly plans) to slice out a bit of space that can be devoted solely to the leagues and corporate parties of 150+ they must turn down now, squeezing a few corporate gigs in each month where possible. For now, they take up early morning and late night slots for leagues and Learn to Curl sessions around junior hockey and figure skating sessions that keep the ice rinks afloat.

Hopefully, you didn't bluff your way through the stretching sessions like baseball players at training camp. You may have taken this for granted when watching John Shuster sink as the U.S. Curling team's skip in Vancouver, but the motion of sliding a stone down the ice is deceptively difficult.

You spend the next 30 minutes banging your knee, burning your hamstrings, and bruising your ego as you go posterior-over-tea kettle repeatedly trying to combine the crouch, the push-off, and the release with volunteers like Denise and Lindsey Juillard. Your quad muscle attempts to escape to save itself as the person next to you offers to sweep the entire session if he can just avoid another round in the hack torture chamber.

(Meanwhile, a native Arizonan in your group will show natural talent for the sport and embarrass you if you are a native northerner. Suck it up.) 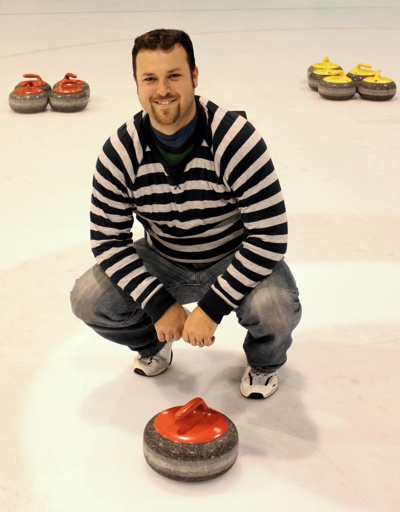 With your first successful trip down the sheet, you join a tiny percentage of Americans to complete the task. In 2008, USA Curling counted only 13,000 members. That number is now rumored to be closer to 20,000 and, if the increase in interest in Arizona is any indication, growing faster still after Vancouver. There's even an Arizona State University curling team.

Once you cobble together enough skill to avoid major injury, you break up into teams. The least-shy person gets nominated as skip and sent down the ice to shout commands at the others. As you learn your hand signals and apply your lessons, you slowly forget about the burning sensation in your quad and your hamstrings as the game's strategy slowly unfolds for you. Maybe not "chess on ice", but a heated game of Chinese checkers, for sure. 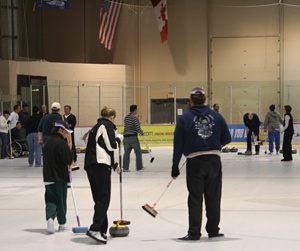 You start hitting your guard placements and knocking rocks out of the house and the guy who couldn't get into a half-decent crouch an hour ago is now placing rocks on the other end of the rink like he'd walked them down the ice and your skip learns not to stand next to the big rocks flying at him and there's the faintest similarity to the actions you're taking and those of Olympians.

When the session's over, they practically have to sweep you off the ice to make room for the tots in enough hockey gear to make it entirely possible that their parents packed 60 pounds of safety equipment into the minivan and left a confused child at home. Not you, though. You went out there in blue jeans and a sweatshirt and a faint memory of ice skating when you were a kid, but you came back a curler: an honorary Canuck.

And as you walk out to your car, the fellow who felt more than a bit frustrated trying to throw his first rock stops you and asks if you want to put together a team for the fall league. You exchange information, hoping to be able to squeeze into one of the leagues given the limited open ice time at the few available ice rinks in the Valley.

You then step into Arizona's outdoor furnace from your brief visit to Canada, desperately looking forward to your next opportunity to chase a rock with a broom over ice in the desert.