John McCain is lobbying to protect Arizona's bases; let's start with the ones at Chase Field.

Share All sharing options for: John McCain For Pitching Coach

No, it's not the average number of people who spontaneously combust every day during June in the Valley, despite all evidence to the contrary. No, it's the barrel-scraping team ERA of your Arizona Diamondbacks. Measured by Baseball Prospectus' WXRL (Win Expectation above Replacement), the Diamondbacks' hurlers have been five wins worse than a staff of filler arms. For perspective, this is also the gap between the second-place team and the 29th-place team on the same list.

Also, for perspective, that's not good.

The hole they've dug for themselves in the desert is now officially deep enough for them to jump into; last night's 6-5 giveback to the Cardinals set the Diamondbacks a mere 17 games under the break-even mark. If you laid all the runners the Diamondbacks have allowed to score in the ninth inning this season end-to-end, they still couldn't stop them from scoring.

Still, this isn't about taking cheap shots at a group of young men doing their level best to succeed. (Not totally, anyway.) We're here to offer solutions. While driving around the Valley last week, we noticed that one prominent Arizonan apparently has what it takes to save the pitching mounds of Arizona safe from those would come from other states (and countries!) to take the bases that would normally be filled with Diamondbacks. 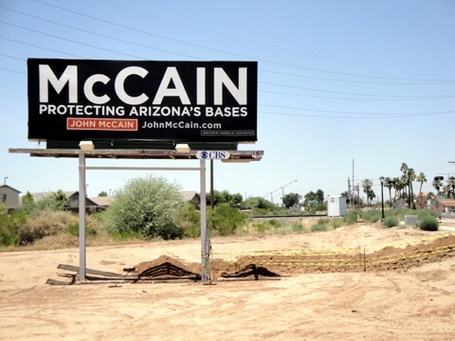 Yes, Senator John McCain of the great state of Arizona has started a marketing blitz to protect Arizona's bases from outside baserunners. Clearly, this is the opening salvo of a strong lobbying effort to win the job of Arizona Diamondbacks pitching coach.

And why not, my fellow Arizonans? This is a man who has not been cowed by sights far more terrifying than the approach of Chad Qualls from the bullpen. (Yes, they exist. No, you don't want to know.) He has defended this state and this country overseas and in Washington. He once pitched us a little-known governor in Alaska as a Vice-Presidential candidate and helped make her a star.

So if you want a born leader capable of bringing a maverick view to baseball ("forget baseballs; we're throwing grenades now! That's what we used in... hey, where did Miguel Montero go?"), please contact the Arizona Diamondbacks to let them know you want John McCain as pitching coach.

John McCain: Protecting Arizona's Bases Because Someone Finally Should.

... what's that? Military bases? That doesn't make any sense at all. The billboard that inspired this idea was facing the former Williams Air Force Base, closed in 1993 during McCain's second term as Senator. Clearly, it can't be that.