Share All sharing options for: Webb 'On Pace' For Return To Mound in 2037

The Arizona Diamondbacks have plenty to look forward to in April 2037. Not only will deferred payments from 2001's championship team be off the books, but ace pitcher Brandon Webb will be back in the starting lineup.

Hinch added that Webb's throwing motion is beginning to look "more like someone who pitches in baseball games for a living and less like a neglected children's wind-up toy with a broken motor."

In addition to having Webb back on the mound, General Manager Josh Byrnes is hoping that the team's experiments in genetic harvesting will pay off in rounding out their starting rotation.

Said Byrnes, "We've invested a ton of research into harvesting Dan Haren's DNA. If it all works out as planned, we'll have our own homegrown Petri-dish starting pitcher. We've also isolated a gene that explains why Dan's so awful late in the season. We're just going to clip that on out while we're at it."

The idea for creating a genetically-perfected lab-developed baseball player was "Eric [Byrne's] idea," the other Byrnes said. "We thought that son of a bitch was just stoned again, reeling off another of his insane ideas while in a pot-induced haze. Turns out, this idea wasn't as insane as we initially thought."

"Doesn't mean Eric wasn't still stoned out of his goddamn mind," Byrnes continued before shaking his head and ruing the Gods for the three-year contract Byrnes signed Byrnes to before finally releasing him in 2010 to wreak havoc in slow-pitch softball leagues across the world. 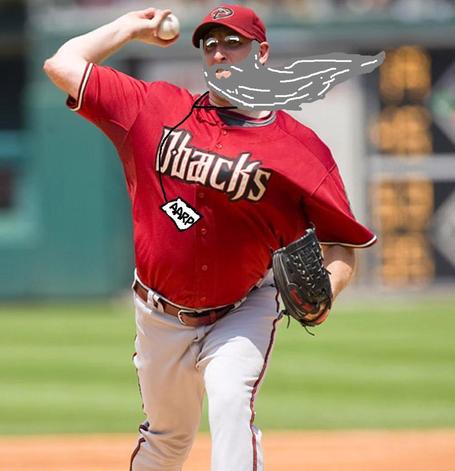