A Night with Football Snakes, The Arizona Rattlers

Looking for a good time? Try the Arizona Rattlers. You might just enjoy yourself.

Share All sharing options for: A Night with Football Snakes, The Arizona Rattlers

If you're like me, you went into this summer with relatively low hopes for sports-related entertainment. May 30 brought the conclusion to the Suns' wild ride of a season and with that, a season of relatively limited Valley sports options.

Certainly in good years, the D-Backs offer exciting baseball action, but a quick perusal of the standings indicates it's going to be a long, dull summer at Chase Field. As for other sources of fun, the Mercury exist, but I think you'll get plenty of WNBA news here already (though as far as I'm concerned you can really never get enough Penny Taylor) and the league may not be your cup of tea.

On other fronts, we've got the World Cup -- which is wildly entertaining, though certainly not Arizona-based -- or something ridiculous like spending time with your family or reading. But how boring do those latter two sound? Fortunately for you, your pal Scott Howard is here to suggest a viable alternative to fancy book learnin' -- Arizona Rattlers football.

For those of you unfamiliar, the Rattlers play in the Arena Football League, which has returned from the dead after a one-year hiatus. And if you're still confused, Arena Football is the brand of football played inside on a 50-yard field with eight players to a side. If you need me to go any further than that, I absolutely refuse and wonder how you managed to find yourself on a sports blog in the first place.

Considering the limited available options, and that I'd never been to a Rattlers game although they've been in Arizona since 1992, I loaded up a group of buddies and headed down to US Airways Center for the 50-yard indoor war.  But before I launch into my review you need to know that meeting up with your friends, throwing back a few drinks, and then taking the light rail down to the arena (all US Airways Center events gives you a free ride on the light rail) is a damn good time.

The foe for the evening was the hated Bossier-Shreveport Battle Wings -- a team that, like the Lakers or Steelers, just enrages the Rattler faithful when the name is uttered (this is a lie). If you only have time for a dime store review, I'll say this: it was fun and I'd do it again.

The first thing you should know is that the tickets are relatively reasonably priced. $10 upper-deck tickets are available, but for $12.25 a pop, you can sit pretty much dead center up top. Now I know that may disappoint those of you with dreams of catching a wayward ball, but the upper bowl still gives you a sweet view and it helps defray the cost from just about the only drawback -- our old friend, the $9 beer.

From an atmosphere perspective, the Rattlers game offers a pretty respectable product considering what I'm certain is a razor-thin budget. The mascot is actually just a random dude named Fang who rides a motorcycle -- which is hilarious -- and there is some sort of cannon sound (or cannon ... who knows) that shoots off after each Rattlers score. No matter how many times you hear an indoor cannon blasted a few hundred feet away, it still manages to shock and confuse your senses.

Outside of the sounds of 19th century warfare, the decibel level inside the arena is surprising considering the dearth of folks in the upper bowl. Not just that, but from what I could tell there are a very strong amount of Rattlers die-hards. Hell, I didn't even know they made Rattlers jerseys, much less sold them in the team shop.

When it comes to game action, Arena Football is a wildly entertaining product, particularly in person. If you've ever heard anything about the game, I'm sure you're aware it's marketed as a high-scoring, fast-break brand of football. And, for lack of a better description, that's exactly what it is. 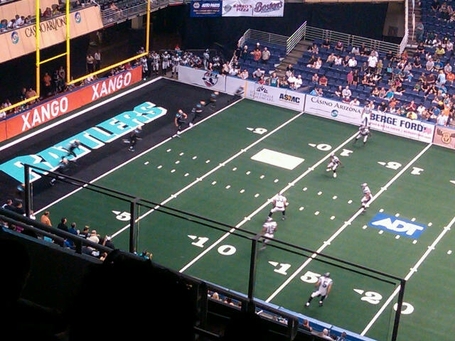 Each offense is permitted to have one man in motion on every play, which allows for receivers to basically get a running start towards the end zone. Although it may appear that the receiver is about two steps offsides on every play, being in motion tends to ensure they get enough space to find the end zone or at a minimum a large gap in the defense. Rattlers QB Nick Davila was expert in finding those receivers Saturday night, as he chucked nine touchdown passes.

Take a look at that number above: nine touchdown passes. If you like scoring then this is your game. It's basically a 60-minute (15-minute quarters) offense-gasm on hard turf. Yet if you somehow can't come up with a touchdown, never fear -- your team is in field goal range just from being anywhere on the field, if you can make it through the tight goal posts.  But it's not that you'd bother kicking field goals, since you're also within a deep crossing route of 6, even on fourth down.

Because I'm not going to insult you by pretending I'm super clever, I'm switching to my favorite writing device to sum up the rest of my experience. Consider it my bullet point effort to explore my evening with Arena Football:

Writing an entire piece as if I'm a member of the Rattlers PR staff is making me feel dirty, so just take it from me folks -- give it a shot. At a minimum, it'll be able to give you a few more good feelings about US Airways Center before Lou Amundson is a 30 minute a game player (I'm kidding ... I hope). If it feels like I just wrote about a good time I had with my buddies, you're completely right.

More information on the Arizona Rattlers can be found at: http://www.azrattlers.com/