Phoenix Mercury Have A Decision To Make

Share All sharing options for: Phoenix Mercury Have A Decision To Make

The Mercury are now two games under .500 (5-7) and are 0-4 against teams with winning records. Fortunately, outside of Seattle there isn't a lot of strong competition in the Western Conference this season. So, with Tulsa playing like an expansion club and not a team that only moved cities and the Sparks losing Candace Parker for the season, it would be quite a feat for the Mercury to miss the playoffs.

However, if they hope to have a chance at repeating as WNBA champions, they are going to have to figure some things out on the defensive end of the floor.

The Mercury started the season in a funk that was attributed to unfamiliarity with new players, which led in turn to many turnovers. It is hard to play good defense when you're turning the ball over 20-plus times. So the focus naturally fell on the offensive end of the floor, which fits nicely anyway with Coach Gaines "offensive is the best defense" philosophy.

The team played a couple of good games and blew some poor teams out of the water and seemed to be on the right track and then bam, San Antonio comes to town and takes Phoenix out of their game with physical play and recovers from a 13-point deficit to win on Friday.

On Sunday, it was the Connecticut Sun who exposed the Mercury's soft interior defense scoring early with post-ups which quickly forced Gaines to switch to his zone defense to combat Tina Charles and Sandrine Gruda in the paint.

"I just shot when I was open. I don't think I did anything too spectacular; they were just doubling our posts off of me. So when they passed out to me, I shot it," Renee Montgomery said of her 5-for-7 three-point (19 points) shooting performance.

It's one thing to get behind to a hot shooting team; it's another when those shots are wide open.

The blame for that falls primarily on the undersized post defense from Tangela Smith, but as Diana Taurasi pointed out, the close outs in the first three quarters were also slow and listless, "We didn't take away their inside. They are pretty big, and they do a good job of getting low. At the same time, they were kicking it and making a lot of shots. We really didn't do anything in the first half but just stand there."

Getting behind by 21 points was definitely attributable to poor energy and effort, but the primary change that fueled the Mercury's 4th quarter 20-2 run to get back in the game was rebounding.

"We lost because we didn't come out hard in the 1st half and 3rd quarter," Coach Gaines said, adding this about his team's late game turnaround: "It's funny, I think it was just getting the rebounds and going. Just straight solid defense. Get the stop, get the rebound and go instead of them getting a put-back after the first stop."

Hard to argue with that or the adjustment that Gaines finally made in the 4th quarter by benching Smith and playing Ohlde the full final 10 minutes.

In the 4th quarter, the Mercury were +4 on the glass (+1 OReb) and held the Sun to only 12 points and only one three-point attempt.

Gaines talking about Ohlde's impact, "Tina Charles has good size and Nicole Ohlde has good size, so she can hold off a player of that caliber. She did a great job, I think. Matter of fact, they stopped posting her (Tina Charles); they went to Sandrine (Gruda)."

Ohlde isn't known as the best post defender in the league, but her impact in this game and at other times when given the opportunity can't be denied. She allows the Mercury to play the other team's best post scorer with single coverage, which creates better rebounding opportunities as players are in position to box out and the perimeter defense can stay home on shooters.

Against teams like the Sun, Dream and Storm -- who have both inside and outside threats -- it is imperative that the post defenders are able to handle things one on one for most of the game.

Asked if Ohlde might play more in these types of match-ups, Gaines would only say, "I've been trying to push her (Nicole Ohlde) into the game more. It's just one of those things where she was needed tonight and she did a great job for me ... great job."

With Ohlde on the floor, the Mercury can't run quite as much and more importantly, the floor isn't spread as well. Instead of having four shooters surrounding Dupree, you know have a more traditional combination of power forward and center, who both need to be closer to the paint. That shuts down driving lanes for Taylor and Taurasi and changes the Mercury's half court sets considerably.

This is a trade-off that Gaines will have to consider, especially when Smith is only shooting 33% from three -- her worst percentage in the last five years. When Tangela isn't hitting open shots and she's not bringing much energy or post presence, she's more of a liability on the floor than Nicole -- even if that means sacrificing some offense.

The Mercury, with Ohlde, still managed to score 27 points in the 4th quarter against one of the better defenses in the league.

The Mercury didn't deserve to win this game playing poorly for 30 out of 40 minutes and getting down by 21 points in the 3rd quarter. And yet it just goes to show how talented the team is that they were able take a one-point lead with 4:53 to go and had several opportunities to steal the win in the final minute.

Conventional basketball wisdom is that you don't blame a loss on a missed shot, but for DeWanna Bonner, who otherwise played a great game, to miss two crucial game-tying free throws with 30 seconds to go is unacceptable. Bonner was an 81% free throw shooter in her rookie season and is shooting 76% this season.

She screwed up and she knew it, "Missed. I've nothing really to say."

Players miss big free throws all the time and it's not the end of the world. Hopefully, DeWanna will learn from this and next time step to the line with more focus or less pressure or whatever it takes her to deliver. She's too good of a player not to also be clutch for her team.

The Mercury only finished the game with 13 assists and 5 of those game in the 4th quarter. There were many times when Taurasi seemed to be forcing the action and playing too much isolation. She finished with 24 points, but needed 19 shots to get there. That's too many for her on a night when she wasn't getting clean looks.

The stretch early in the 4th when the Mercury executed their plays and shared the ball was the best they looked all night. Unfortunately, it was the exception and that can't continue. 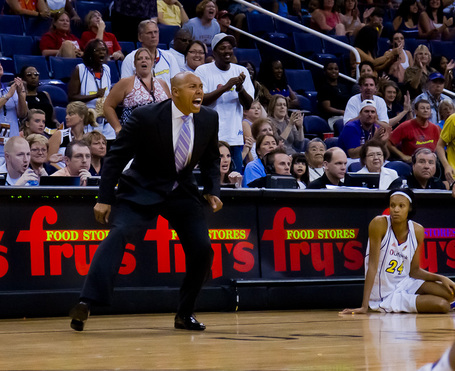 KEY STAT OF THE NIGHT
Led by Renee Montgomery's 5-for-7 performance from the three point line, Connecticut hit 10-of-18 three-point attempts compared to 6-of-20 for Phoenix. The Mercury is now 0-6 on the season when shooting a lower three-point percentage than its opponent.

Sparked by PENNY TAYLOR's three pointer to open the final period and led by DIANA TAURASI's nine points, the Mercury responded with a 20-2 run of its own over the first 5:07 of the fourth quarter to take an 87-86 lead, the club's first lead since its 7-6 advantage with 8:28 in the first quarter.

• Penny Taylor recorded 23 points on 8-of-15 shooting and matched a season-high with six rebounds.

SUN HIGHLIGHTS
• Forward Sandrine Gruda scored a season-high 21 points on 9-of-14 shooting in her first start of the season.

• With 24 points and 12 rebounds, Tina Charles recorded the eighth double-double of her career.

• Coming off the bench for the first time this season, guard Renee Montgomery matched a career high with five made three pointers for 19 points.