Becoming a U.S. citizen is something most people do by virtue of successfully being born. Now, being born isn't the easiest thing to do but generally the baby has little input in the process.

Becoming a U.S. citizen at a more advanced age is a slightly more complex task, which for Suns assistant coach Igor Kokoskov has taken seven years. The process, which did not include leveraging his American-born wife's status, culminated in a special ceremony staged beautifully and just for him on the main court of the appropriately-named-for-the-occasion, U.S. Airways Center. 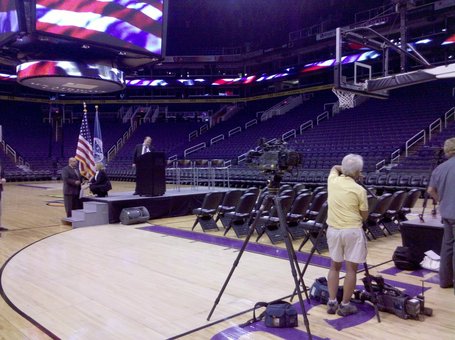 For Igor, it was a very important and meaningful event as he was asked to swear his allegiance to his new country and disavow ties to the place he was born, Serbia.

"It's very emotional day. I feel it's getting another world. I'm here because of special abilities coaching, but I hope I'm here also because people see me as a good person and someone who treats the people right," said Kokoskov.

Of course, when asked how this would all play out if by chance the U.S. should play Serbia in a World Cup match (a very real possibility given the brackets), the new American would only say, "Our team's going to win for sure."

Coach Kokoskov gave a lot of credit to his friend and boss, Alvin Gentry. "I just whispered to Coach Alvin's here that I wouldn't be here without him because he hired me in 2001. He was the head coach of the Los Angeles Clippers and he was one of the reasons why I became the first non-American coach in NBA history and after that, it was so much easier. So Alvin is taking a lot of credit for me being here today."

Gentry had this to say, "I hired him because I thought he would be a great coach and he hasn't proven me wrong at all in that department right there. It's good to see it. I know it's something very important to he and Trish, his wife, and I know he takes pride in being an American citizen. I do know that."

There was certainly a lot of love in the room (really, really big room) among the Suns staff members who all attended to show their support. Steve Kerr and David Griffin were there, along with other staffers. Robert Sarver did not attend, although I did see him in the building a few hours earlier.

A couple things I didn't know about these kinds of ceremonies that I will share with you.

Did you know that the President of the United States delivers a message via video (which, in this case, was kind of spooky with the giant head and echo)?

Even more fun was the mandatory singing of Lee Greenwood's "Proud to be an American". I am sure in a convention hall with hundreds of people, this is pretty cool. In this case, it was kind of funny. Even more funny was the all-too-serious suits from the U.S. Citizenship and Immigration Services singing and waving their flags. A bit too jingoistic for my taste, but funny.

One thing I am more certain of today than I was yesterday is that we don't want this guy to become an American. Shameful.

Congratulations to Igor. It really was a neat ceremony despite the goofy singing. Igor's always been great to work with and in fact has nicknamed me "The Colonel" because we once spent some time chatting about the six months I spent in Bosnia in 1996 while in the Army.