Golf's Future In Our Own Backyard

Futures Course in Glendale AZ offers nine beautiful holes for beginning golfers, or golfers of any other age or experience level. It's a fantastic place to pick up an appreciate for the game and its traditions.

Share All sharing options for: Golf's Future In Our Own Backyard

A hush falls over the gallery as he lines up the birdie putt to win it all.

He stands over the ball with eyes fixed on his target and thinking of nothing else. Slowly, he swings the putter back and comes through with it to strike the ball perfectly. The ball follows the path he'd expected and he tracks it all 10 feet until he sees it drop into the hole. Mission accomplished ... victory is his, and the gallery goes crazy.

It's a scene that could likely play out this weekend at the US Open at Pebble Beach. This scene was played out on a much smaller course and that gallery ... well, it was a huge gallery in his mind. The putt ... yes, the putt was true and it did go in, giving the golfer a personal victory. No large checks attached. 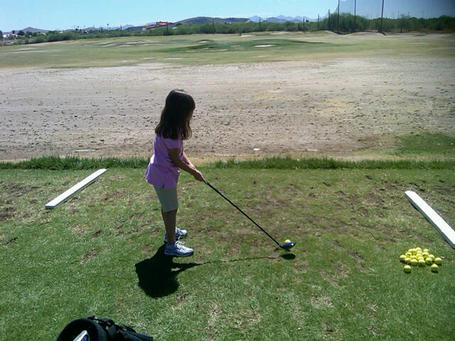 These events happen on an almost daily basis on the Futures Course located at The 500 Club golf course (4707 West Pinnacle Peak-Glendale, Ariz.). Young golfers who might envision themselves as the next Phil Mickelson or Lorena Ochoa comprise just some of the players you'll find on this small jewel tucked in next to the main course adjacent to a backdrop of the beautiful buttes at Thunderbird Park.

The beauty of this course isn't just the physical layout the ownership has crafted, but moreover in the truly unique programs that open the door to the world of golf for many who might not otherwise be able to afford to play along with those who are eager to learn the game.

None of this would be possible without the visionary ownership behind its inception. Who knew an Indy car champ and Hall of Fame racer and a top PGA executive could come together to create this masterpiece. Tom Sneva ('83 Indy Champ) and Brian Whitcomb (Honorary President of the PGA) came together to build The 500 Club in 1989. It's consistently rated one of the top public courses in Arizona for its layout, prices and incredible scenic views. With the help of GM Jeremy Knowles and PGA instructor Sheila Peterson, the Futures Course was opened in 2004.

Why is this is such a big deal, you ask? There's not another course like this -- not just in Arizona, but in the entire country! The design, layout and construction was all done by all of the people previously mentioned, with additional help being provided by local contacts.

Unlike most businesses, this idea was not motivated by money. As an ASU alum and former Sun Devils golfer, Whitcomb has had a significant influence on the overall growth of the PGA of America. He's designed and built a number of courses, but he did this as a way to give back to the very community and sport that had been so very good to him, according to Knowles.

It's the ultimate act of paying it forward, if you think about it. In today's economic climate, where else can you find a course giving you free golf for three months? More on that to come.

You can tell in talking to both Knowles and Peterson what a labor of love this program and course is for them. As the General Manager of the course since '96, Knowles saw more than just young golfers on the course one day.

"The whole process was getting kids involved in golf, getting families involved in golf, having them get off the couch and outdoors and being active together and playing golf." Knowles went on to say, "As they grow together while they're young, they'll most likely continue to play golf as they get older, keeping the families playing together and it's just a great opportunity for everyone."

Sheila Peterson is an 18-year PGA member and was put in charge of this one-of-a-kind course and program and she's been amazed and thrilled that it's become everything they thought it might be.

Before you get those free rounds of golf, there is one caveat. All junior golfers must take a golf etiquette class in order to be eligible to get their junior member golf pass, which then provides for the free golf. This is key for a number of reasons.

The etiquette classes are provided in the spring months, in advance of the summer playing season. Any junior golfer who wants to take part in the program pays a $20 fee and for that they receive a one-hour class taught by Peterson herself. The class goes over golf rules, but at its core it's about golf etiquette. What's second nature for those who grew up playing the game, is all new to these wide-eyed juniors who have maybe never been on a course before, nor have their parents.

That's just one of the reasons this program has been so successful, because Peterson never assumes any of her young golfers know all the important details of this great game.

Having sat through a couple of these classes myself, I can tell you each class gets every bit of information she has and there are no shortcuts taken. As Peterson puts it, "It doesn't matter how well or how poor you play. If you have good manners, people enjoy playing golf with you; it doesn't matter what you shoot."

It's obvious that both Knowles and Peterson are as eager to provide great family experiences and memories as they are in helping their 500 club members improve their handicap. Junior golfers turn into adult golfers and the more they understand that golf is more than just hitting the ball hard and straight, the better the game will be for it.

There are number of valuable life lessons that the PGA veteran makes sure to impart on each of her classes, as well. "You're the only referee on the course. We are the only sport that doesn't have referees; you are your own referee. Being on time and character. You can pretty much tell someone's character by playing golf with them."

So you've found the course, you've taken the class, but the only problem is you don't have any clubs. There's not a detail the folks at the Futures Course haven't thought of. In working with the local chapter of the Junior Golfers Association, any junior needing equipment can contact the JGA and inquire about getting equipment and it's all free of charge. This is equipment that's been donated, but provides a great resource for those who can't or don't want spend a lot of money on new golf clubs or a bag.

The course is done, you've got your clubs ... now it's time to put it all into action. The course is yours for the taking. From June 1 until Sept. 1, all junior golf members who have completed the etiquette class can come play golf and bring a guest and it's absolutely free. That's right: a free round of golf at a well thought out nine-hole course that will test all aspects of your game. It's truly a win, win for everyone involved.

As Peterson noted, it's their job to grow the game. "Get them started however we can in a smaller opportunity and then gradually move them over and hopefully they'll continue to play on the big course."

Mind you, while it's called the Futures Course, this doesn't preclude any golfer of any age of taking advantage of this 9-hole beauty. There are days when you might have a foursome of young players teeing off and right behind them is a group of older adults. Bottom line, this course offers something for everyone. But at its core, it's seen as a starting point for young golfers who are attracted to the game and need a place where they can sharpen their skills.

With the success they've seen in the five-plus years of this course and program, could this become the pilot program for more setups like this across the country? Knowles for one would love to see it, but says it's no simple task. "More power to them if they can accomplish the same thing we've done, on the East coast or in the Midwest. It's pretty unique in its own right and it's all been created by Brian and Tom and taking the funds out and seeing the vision and doing this for all of these kids ... it's really been great to see."

While the pros are teeing it up at Pebble Beach this weekend, you can find another set of golfers doing the same thing at the Futures Course.

You won't find any corporate tents, sponsor logos on the bags and caddies or huge galleries (at least that you can physically see), but what you will find are young golfers who have gained an appreciation for the game and what it has to offer them both now and in the future.

Who knows -- maybe one of these boys or girls could be standing on the green on the 18th at Pebble Beach (US Open) or at Oakmont Country Club (US Women's Open) someday, eyeing that birdie putt to win it all. For just a moment, they'll flash back to all those rounds played and putts knocked down when they were playing in their own major on the Futures Course.

The work and dedication pays off now and with a simple smooth stroke, the ball rolls true and drops in the cup and the future is now.