Steve Kerr Press Conference: Insists This Was His Decision For Family Reasons

Share All sharing options for: Steve Kerr Press Conference: Insists This Was His Decision For Family Reasons 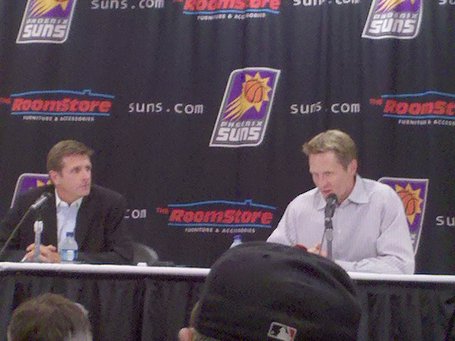 It is hard to imagine that Steve Kerr would so suddenly do an about-face about his desire to come back to his job as the Suns General Manager. Just weeks ago he was very clear about his intention to do so which made today's announcement all that much more difficult to swallow.

Follow that with the rumors that Kerr was leaving due to a contract dispute with Sarver or some kind of disagreement over Stoudemire's contract situation and this entire thing was falling squarely back on the shoulders of the team's owner.

I said earlier today that the Suns needed to get Kerr out to publicly answer questions and he did that this afternoon. He answered every question and was asked multiple ways to clarify that this was his decision and there was no contract or pay issues.

He would not say specifically what opportunity he's talking about. Most assume it's the TNT gig. Kerr stressed that he has three teenage kids and has been gone a lot over the past three years and wants to spend more time with them before they grow up and are gone. He left the door open for returning to a GM position in the future.

Kerr couldn't have been more clear in his refutations of all the rumors. He denied explicitly that there was any kind of financial motivation for his departure and defended the organization against charges of being "cheap".

"There's never been a question about the financial commitment. There's moves that you can question, some of which I made, and you can question where some of the money went, but you can't question the facts, which are that we've had a huge payroll over the past several years," Kerr said. "This is not a contract issue. This is a career and a personal decision that I've made."

Kerr said he spoke with Alvin Gentry today and is in the process of reaching out to the team's players. He talked to Grant Hill and Stoudemire and wasn't able to reach Steve Nash in South Africa. Kerr won't involve himself in any free agent offers and is relying on the Suns entire team for the draft, which has always been a group effort.

Alvin Gentry will take an increased role during the interim period while the team looks both internally and externally for a replacement.

Do you believe Kerr?

I, personally, want to trust Kerr. He's a good guy and a person you want to believe in, but at the same time, he's shown over his time here that he understands the need to spin information and has on more than one occasion said things about players or trades that were not true -- but had to be said.

If you are a cynic, you can easily find reasons to think that Kerr's leaving isn't about his family or desire to get back to the comfy life of a TV analyst. Certainly, if he takes a position with another NBA team within the next two or three years then you can say his leaving was about Sarver.

If Kerr goes back to a relatively laid back existence on TNT and spends the next four or six years seeing his kids through their high school years before coming back to an NBA job then that will be only thing that can really prove the motivations for this move are not as he claimed.

As for the rumors coming from those reliable national sources, let's not forget that they can have agendas, too. Not the reporters, but their sources in other teams who might believe they have the true inside scoop or perhaps are just trying to muck things up for the Suns.

Like many things in life, the real truth is often very difficult to suss out, so we are just left with opinion and impressions.

Today, Steve Kerr did his job in trying to make sure those impressions and opinions are as positive as possible given the reality of his departure.

If his job was carrying water for the Suns, he did it well.