US Soccer Alive And Drinking In Arizona

Auntie Sam and raucous fans of US Soccer await you at your local soccer bar during this World Cup.

Share All sharing options for: US Soccer Alive And Drinking In Arizona

In retrospect, it had to be a good sign for the U.S. Soccer team when Auntie Sam greeted me at the door and offered me a drink.

Sam, the early bartender at Rosie McCaffrey's in Phoenix, was clad in an old U.S. Soccer jersey and a welcoming smile, both of which were welcome at 7 a.m. on a Saturday. A couple other gentlemen were soon joined by a few young couples, all in search of a carbohydrate-rich breakfast and a beer.

In scattered enclaves like this around the Valley, ex-pats and Anglophiles gather far too early in the morning on any given weekend to catch an English Premier League match and down a beverage or two well before noon. However, that league's season is over; instead, we gathered far too early for an 11:30 a.m. start to the U.S./England tilt that would formally kick off the World Cup for Americans.

(Also, that egg-and-potatoes breakfast and a hard cider didn't hurt, as incentives went.)

Why so early, though? To get a seat, of course; you might have heard a sore word or two at this soccer-based intrusion into your friends' personal news cycles, but the number of people who enjoy rooting for soccer and country continues to grow in the United States, no doubt aided by ESPN's willingness to air the sport.

As Argentina and Nigeria played in the background in what amounted to an appetizer match, the crowd filtered in and claimed their spots. Clearly, some were along for the ride, getting their first experience with international footie. One man trying to explain where he was on his cell phone confused the fellows from South America with Australia, an easy mistake.

(Also, their first experience with a world map, apparently.) 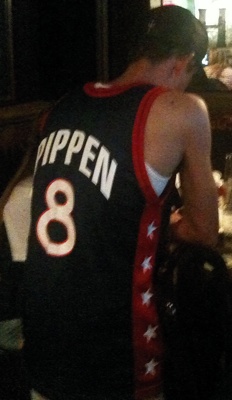 Well, it is one of the US sports teams; photo by Dennis Tarwood

As the bar loaded up on people loading up, I was joined by SB Nation Arizona's own Seth Pollack and Bryan Gibberman in an American brew. "Do you have any Sam Adams, Sam?" I asked. "Nope," she replied. "What American beers do you have? I require jingoism in my alcohol." She scrunched up her face. "We got Bud Light."  America the Beautiful, indeed.

Three other men got around the problem by setting up shots dedicated to the U.S. team. At 9:45 a.m. Now that's commitment to a cause. Unfortunately, this didn't prevent the bar from temporarily running out of clean glasses at 10:15 a.m., 75 minutes before the match.

Chants of "U-S-A!" and "Ole!" filled the bar as early as 10:30, leading an exasperated bar manager to exclaim, "Maybe everybody will be quiet when the game gets started!" It's true there wasn't a single vuvuzela in the building, but that wasn't going to quiet this crowd.

As the game finally started and the U.S. team gave up a very quick goal, the hidden fans of England removed their disguises and let up a cheer, showing the bar to suddenly be a 70-30 U.S. split and not the 95-5 one might have guessed from a glance across the room. Emboldened by booze and a lead, a few taunts and chants filtered through the bar for the first half while the U.S. fans clutched their glasses a bit more tightly. 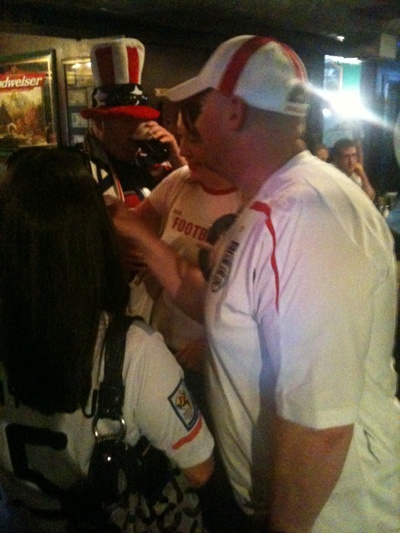 When Robert Green, the English keeper and answer to the trivia question, "Who's the first man in Great Britain to ever earn a celebrity sieve sponsorship?" allowed Clint Dempsey's trickle to own him for a tie score late in the first half, the bar exploded with relief and joy.

For most attendees, the second half was a blur of Tim Howard's blocks for the U.S., cheers, and American ale.  When the match ended in a 1-1 tie, no one fussed about the lack of scoring or the lack of a clear winner. Sometimes, when taking on a stronger opponent, you take your lucky breaks and find a way to go your separate ways with both sides saving face. And that's your Revolutionary metaphor.

On Friday, the U.S. play Slovenia in a game with no such metaphor. Still, if you head down to Rosie McCaffrey's at 7 a.m., perhaps Auntie Sam will be there to greet you with a cold beverage and a hot meal. And, honestly, what more can you ask for from your country?