After two pretty decent starting performances by Washington Nationals rookie Stephen Strasburg, Christian and Jewish leaders have come together in admitting that their doctrines have been inaccurate to this point.

"As it turns out, Strasburg is actually the messiah," said Pope Benedict XVI. "It's a simple mistake, really. We were looking for the wrong miracles. We all expected walking on water, healing the sick and other similar sorts of shenanigans. But we should have been tipped off by the 100 mph fastball."

The Pope paused briefly to laugh to himself and shake his head before continuing, "Have you seen that thing? It's smokin'. Struck those fools out looking."

Religious folks around the world have begun congregating en mass to determine how Strasburg's ascension to demigod will affect their lives going forward.

Already, Strasburg's followers have begun theorizing about the extent of his abilities.

"I heard his change-up can cleanse the soul of all sin," said Rosa Cortez, attendee of a local Washington D.C.-area Catholic church. "They're also saying he's got a curve ball that heals all physical disease." 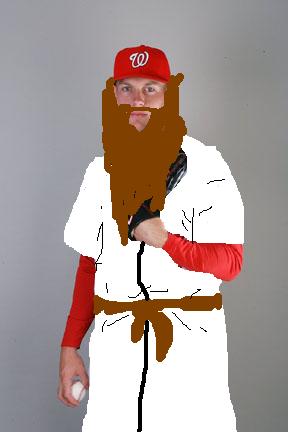 The Strasburg: Savin' Souls And Games