Pac-10 Expansion: Confusion Is The Name Of The Game

Share All sharing options for: Pac-10 Expansion: Confusion Is The Name Of The Game

Plenty of conflicting reports this morning on where Texas and friends are going:

The departure of Texas, Texas Tech, Oklahoma and Oklahoma State to the Pac-10 is imminent, four sources within the Big 12 said Monday.

One source said commissioner Dan Beebe’s last-minute plan to save the conference has “zero” chance to succeed. Another source said it is “very unlikely” to succeed.

On the other hand, the heretofore reliable Orangebloods.com says:

In a bombshell development that could bring a halt to seismic changes in college realignment, sources tell Orangebloods.com Texas is willing to come to the table with the 10 remaining Big 12 schools to see if there’s consensus for a plan put forth by commissioner Dan Beebe to hold the conference together.

Texas AD DeLoss Dodds appears to have helped persuade UT president Bill Powers to hold the Big 12 together with 10 teams.

UT officials were expected to reach out to the other schools around the league on Monday to see if the Big 12 can be saved with 10 teams.

Such a move would appear to at least put on hold a courtship between Texas and the Pac-10, which all but seemed solidified as of Friday when Nebraska announced it was heading to the Big Ten and Colorado had a press conference with its new commissioner – Larry Scott of the Pac-10.

Fortunately, SB Nation’s own college football expert Spencer Hall has it all broken down with a map: 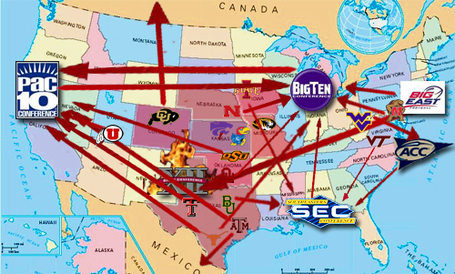