Share All sharing options for: Merc Tear Through Shock Defense, 116-84

It wasn't so much the hot outside shooting this time as the Mercury taking advantage of Tulsa's press and zone defensive schemes. All game long the Merc got out in transition, scoring easy buckets at the rim. In the half court, Phoenix attacked off the dribble against pressure defense that was just too aggressive for the Mercury's talented ball handlers.

Coach Gaines had a couple of his former LMU teammates at the game who played against Nolan Richardson's Arkansas Razorbacks in the 1989 NCAA Men's Division 1 National Tournament. 21 years later, there's still a lot of similarities between the two styles of play.

"His (Richardson's) system is press, generate steals to get easy baskets and our system is the more shots we take, the more easy shots we get and to make the tempo so fast can't sustain it. So it's kind of like the same philosophy, but two different ways of looking at it," Gaines explained.

Krispy Kreme's certainly weren't in doubt by halftime with the Mercury setting a new franchise record of 59 points in the first half with Taylor, Dupree, Taurasi and Johnson all scoring in double figures in the first 20 minutes of offensive joy. The team also set a new WNBA regular season scoring record with their 116 points.

Taurasi (18 points), Taylor (14 points and a career-tying 8 assists) and Dupree (18 points on a franchise record 9-9 shooting) did their part, but the more impressive performance came from the Mercury bench.

Undrafted rookie Taylor Lilley continues to prove her skeptics (me) wrong. Playing with no fear and an impressive amount of floor presence, Lilley did more than nail threes at an alarmingly efficient rate. But she did that too, notching a career high 14 points on 4-8 shooting from behind the arc.

"I think what it comes down to is just playing hard and trying to do all the little things right and just trying to be there when I can and just creating some kind of activity on the court," Lilley said.

Ketia Swanier pushed the ball hard and had a couple of very impressive assists in the lane. "I think it's hard to press a team that likes to run," Swanier explained about how she and fellow point guard Temeka Johnson were able to be so effective in this game pushing the ball and helping lead the team to a franchise-typing 29 assists.

Nicole Ohlde played big minutes and had her best all around game of the season (11 points, 6 rebounds), "I felt like it was one of those games where stuff just started to come together."

The Shock played last night in San Antonio and clearly did not play at their peak potential, but Coach Nolan Richardson also understands that his team is lacking in talent, "When you look at our basketball team, we've got less than an expansion ball club. We've got players that were second team -- we don't have a star."

It's certainly good to see the Mercury log a win like this and continue their trend towards championship form, but I can't read too much into it either, given how poorly Nolan Richard's system works against a team like Phoenix and how tired and ineffective they were.

Still, the Mercury obviously feel they've turned a corner and are getting into shape physically and mentally to play their style of ball.

KEY RUN OF THE NIGHT 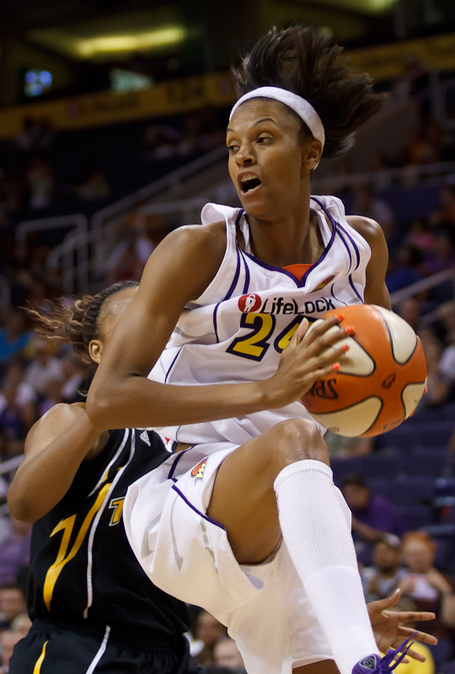