Even when the the Lynx battled back from a 15-point 1st quarter deficit and built their own 8-point lead early in the 3rd quarter, there was never a sense that the Mercury were letting the game slip away.

Coach Gaines agreed, "That is a problem of a fast-break team, that happens a lot. If the other team gets on fire, they catch you ... I felt okay because how they got back in the game was they shot 21 free throws in the 2nd quarter. It wasn't 21, maybe it was 17."

It was 12, but his point stands. The Lynx 30-point 2nd quarter was as much about the Mercury missing open shots (2-8 from three) which led to transition attack and Mercury fouls. As Corey always says, his best defense is his offense. When his team scores and can get back and set their zone, they are an effective defensive unit.

Despite being down, and despite some beautiful shots from rookie Monica Wright (21 points in 22 minutes), Phoenix kept pushing the pace and sure enough, right about the 6 minute mark of the 3rd, you could see the Lynx start to wear down. Of course, it helped me to also be sitting close enough to hear Minnesota Coach Cheryl Reeve imploring her team to move without the ball and get back in transition. They didn't.

"We made a decisive point to keep running it when they started to look tired. I think that Temeka (Johnson) did a great job of that," Penny Taylor said.

Johnson had 10 of the Mercury's 27 assists, along with 13 points, for the team's only double-double.

A couple of Lynx shots allowed them to hold their lead on the scoreboard, but it was pretty clear at that point that the momentum was turning as the Mercury were suddenly scoring quickly in transition. Reeves called a timeout after the Mercury tied the game at 63 with about 3 minutes left in the period, but she probably waited about 2 minutes too long to sense the shift and give her team a rest.

The Mercury extended the lead to 18 in the fourth and cruised comfortably home behind Diana Taurasi's 17 4th quarter points. In the fourth alone, MVDee shot 5 of 6 from the field, including 3 of 4 from three, and was 4-4 from the line. She finished the game with 31 points, 7 rebounds and 5 assists.

Penny Taylor, who had her own strong 20-point 3rd quarter on 8 of 13 shooting, said this about the win, "I feel like it was confidence and good energy out there ... It's just the confidence. You could see it, you could feel it. Good energy and we need to remember that and replicate it in the next game."

It wasn't all transition basketball for the Mercury. In the first quarter, Phoenix did a much better job moving the ball and spacing the floor and as a result, they got plenty of open looks.

"That's been an issue for us, having good spacing. A lot of times we have four on the perimeter because Tangela is the one rising up on the pick and rolls and Candice is the one diving down and we've gotten a little bit better spacing, the wings pulling down to the corners more, so we are finding we can do the kick-kick and get open looks there, as well."

Candice Dupree on finding her way

Dupree had a much better game, catching the ball in rhythm and not forcing the action. 14 points (7-8 shooting) and 8 rebounds in 26 minutes was exactly what Mercury fans were hoping for when she came to Phoenix. Going into this game, Dupree was third in the league in field goal percentage (.582), behind Sylvia Fowles (.636) and Chante Black (.595). An 88% night is certainly going to bump her up to 2nd.

Dupree said this about her progress, "I feel a lot better than I did five games ago ... I would like my stamina to be a little bit better, but it was an adjustment period for me."

Mercury marketing maven, Amber Cox, made sure the team knew that they were only one point from earning a treat for the fans. Taylor, who missed the only Mercury free-throw of the game, joked, "Trying to take care of them. We need healthy fans."

KEY RUN OF THE NIGHT

Trailing 60-52 with 5:17 remaining in the third quarter, PENNY TAYLOR scored 10 points in just over two minutes sparking a 35-9 run that gave the Mercury a game-high 18-point lead (87-69) with 6:09 remaining in the game. Minnesota was able to cut the lead to nine points on two separate occasions, but Phoenix pushed its lead back to 17 with a 10-2 spurt in the final 3:16. 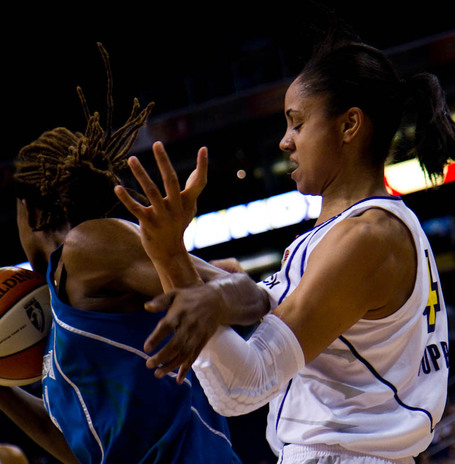