Share All sharing options for: Seimone Augustus Returns To The WNBA With 13 Points In 32 Minutes

One of the WNBA's brightest stars made her return to the court after almost a year-long absence following a torn ACL and abdominal surgery just weeks before the start of the 2010 season.

Augustus played a surprising 32 minutes in her return and at times showed flashes of that incredible mid-range game. She finished 6-for-13 from the field but had a stretch in the third quarter where she was 4-for-4 including a 3-point shot.

Despite being her first game in almost a year, Seimone was happy with her stamina. She reported a few stretches where the ball was going up and back without a stop that got her winded but for the most part she was able to recover and play.

Overall, Augustus agreed that the Mercury's up-tempo style of play took it's toll on a Lynx team that is off to a disappointing 2-8 start to the season. "When you're playing Phoenix you know it's an up and down game and it's just a stretch of getting back in transition and things that we didn't do."

"I think they made 14 3s tonight, that's a matter of getting back in transition and picking up and also putting the pressure on them, trying to run transition back on them. The tempo just kind of slowed down when we got the ball but Phoenix being a running team just kept running," she added.

Lynx Coach Cheryl Reeves said this about the return of her team's leader: "Honestly, I didn't think that she would be able to play 33 minutes against the Phoenix Mercury at the pace that we have to play when you play these guys. I was happy to have Seimone back out there and I thought she held her own."

Augustus was content with the way her team competed in this game compared to other losses and cited the need to find more chemistry on the court as a solution to their woes. 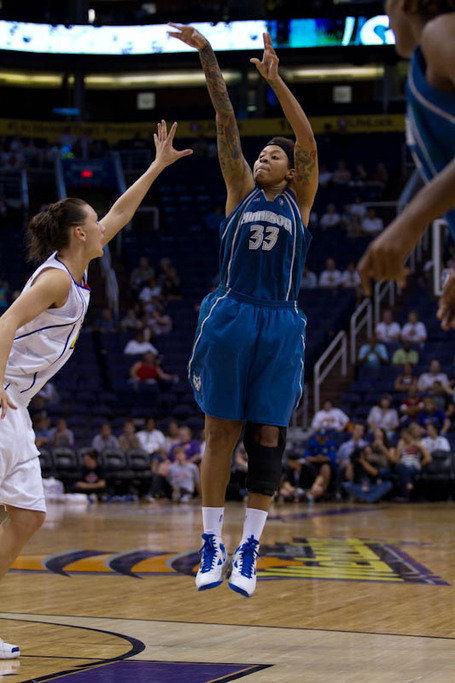