Dan Majerle Is Stalking Me (And I Don't Mind)

Share All sharing options for: Dan Majerle Is Stalking Me (And I Don't Mind)

On my first morning as a resident of the state of Arizona nearly two years ago, I immediately recognized Dan Majerle. He lingered over a healthy breakfast and a newspaper in a Scottsdale restaurant as my family and I shoveled down cholesterol and sugar to gird ourselves for the 85-degree 9 a.m. move. (That's probably a move everyone in the Valley is more than familiar with, but it was my first.) 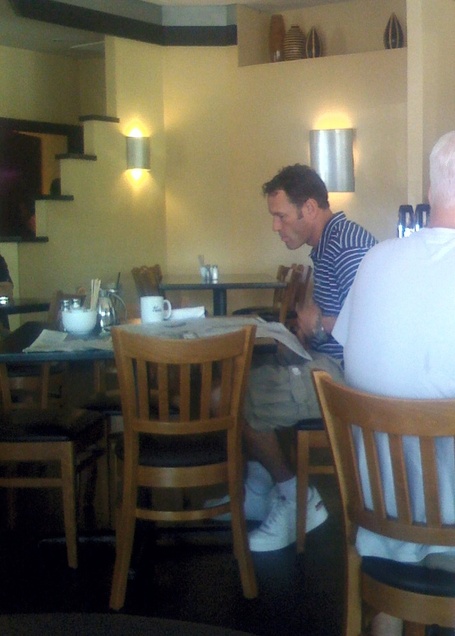 I knew Thunder Dan better as the man that left the court in disappointment after the 1993 NBA Finals. As a lifelong Chicagoan until that 9 a.m. unpacking, my strongest memories of him revolved around his decent but inevitably futile performance that summer, punctuated by my first summer living in the city proper and joining the impromptu parade on the North Side led by honking cars and sprinting pedestrians.

After that, Dan the Tan drifted from memory like all the other victims of Pippen's (and Jordan's) Bulls, like what's-his-name, whozitz, and Elden Campbell. But there he was, sipping his coffee and silently welcoming me to the desert. What a boon! Who could expect to see such celebrity on their first day?

I now know, as you already did, that spotting Dan Majerle in the Valley is like looking for a theme restaurant: You're bound to run into one in short order and you know exactly what you'll get.

Look, there's Thunder Dan at the Diamondbacks game, chowing on popcorn! He's at the Mercury game, canoodling with a hot dog! There he is, chucking wild shots up at the end of shoot around with the scrubs on his way to abuse the pre-game buffet!

(Honestly, I always see him eating. He must work out something like 17 hours a day.)

Even if I don't leave the house, I can flip on any of the local channels and wait 15 minutes to see his glowing visage shilling for some product-or-another or wander down to one of his restaurants. The man's everywhere in Phoenix, not unlike the sun he worships.

That's why reports about him interviewing with the 76ers for a head coaching gig (along with most North Americans who have ever held a basketball; my interview came just before Doug Collins was hired) seemed ludicrous on their face.  How could Dan Majerle leave the admiration of Phoenix residents for the cold, dark, and unrelenting environs of Philadelphia? (And those are just the fans, amirite?) He's not Thunder Dan in Philly; he's Coach. At best.

When I started covering the Suns for SLAM Online, I got the opportunity to sit next to him in Alvin Gentry's pre-game chat with media. (Yes, his plate from the player buffet was stacked most nights.) Despite sitting mere feet from the local legend 20 or more times this season, I failed every time to thank Dan Majerle for silently serving as my welcoming committee into Arizona, nor have I been tempted to do so.

It'd be thanking the Tooth Fairy for her work.  Being Thunder Dan full time is the only job Majerle has now and, by all accounts, he loves it. He smiles that radiant smile and waves that huge mitt at the crowd and they all cheer and he smiles wider. It wouldn't occur to him to be anything else. That's the Thunder Dan experience, one of the best parts of being a Valley resident now.

On the other hand, I have been tempted to ask him for a few chips off his plate. The player buffet is so much better than the media buffet.