Members of the Arizona Cardinals brightened some spirits and made some new friends Tuesday at a Phoenix homeless shelter.

Share All sharing options for: Arizona Cardinals Spread Some Dirt - And Holiday Cheer

The event was the Cardinals' annual Hometown Huddle community service day, in partnership with the NFL and the United Way. Kids, players and volunteers planted flowers in flower beds and flowerpots and painted picnic tables. 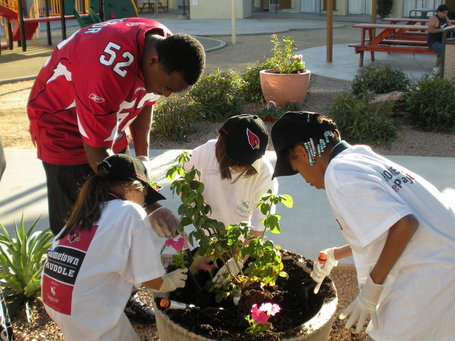 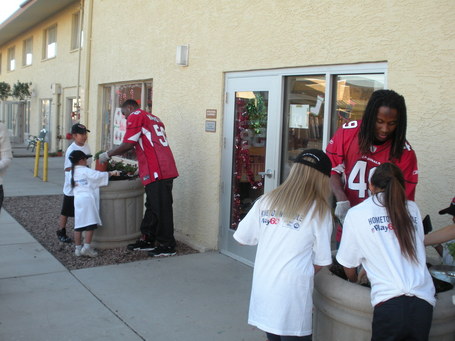 "It's just great to get out, hang out with kids," Dray said. "Do something wholesome, like getting them out and away from video games, away from TV. Get them out here doing something good for the community and the environment like planting some plants. It's fun."

Dray said his favorite part of participating in such events is the one-on-one moment with a kid, when the child shares a detail about his life. The UMOM shelter houses 129 families, about 500 individuals, 300 of which are children.

"That's when you know that he's pretty comfortable," Dray said. 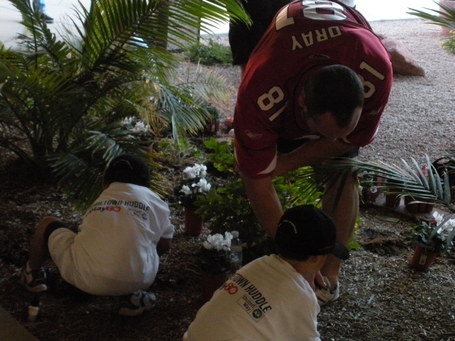 After the work was done, the players took groups of kids to different places at the shelter, holding a mini-training camp in the gym, hanging out in the rec room and shagging balls for kids who were trying to throw them into targets.

The kids seemed to enjoy themselves the most when crowding around the players for autographs. Hadnot pretended to be "T-Rex" and stomped toward some kids, who went scurrying in different directions. 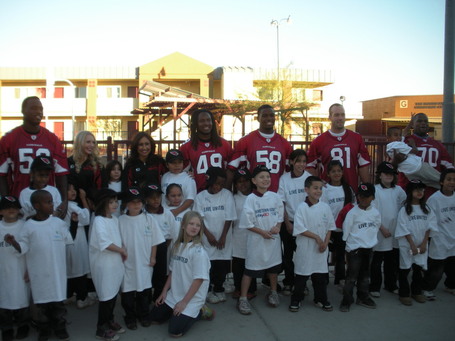 "I kind of grew up around this type of area," Washington said. "It's kind of hard around this time, especially around Christmas, and you want to give back any way you can."

The players couldn't completely escape from inquisitive youngsters' questions about why they aren't winning.

"We're going to play better, OK?" Hadnot responded to one. "You keep supporting. I appreciate it."