The Phoenix Suns are back in the desert and will host the Indiana Pacers tonight at US Airways Center and revenge is on the mind. We aren't sure exactly who's mind it's on, but perhaps it's the Suns fans who will give Danny Granger the "LeBron Returns To Cleveland" treatment thanks to his big "shhh" moment from last season. Bright Side of the Sun has all the details of this hated rivalry.

Indiana, meanwhile, will wrap up a four-game road trip out west tonight and is 2-1 so far on the trek following Wednesday's 110-88 loss in Utah.

Darren Collison finished with 16 points, five assists and five rebounds for the Pacers, who saw a modest two-game winning streak come to an end. Brandon Rush and Roy Hibbert each added 15 points, while Danny Granger collected 14 points and seven rebounds in defeat.

The Suns will likely keep Earl Barron in the starting lineup to match up with Hibbert, who is averaging 9.2 rebounds per game. That will let Channing Frye play against the bruising but shorter Josh McRoberts.

Barron grabbed four rebounds in 25 minutes in his first start with the Suns last night, but his impact was felt on the overall team effort, thanks in large part to his solid box-outs of the opposing big man, as can be seen below.

1) The shot went up from the corner and Barron was standing in front of the rim after helping off his man to contain Steph Curry's dribble penetration. Instead of just standing flat-footed and watching the ball as the Suns have been prone to do, he immediately looked for a body -- in this case, David Lee, who wasn't his original assignment. 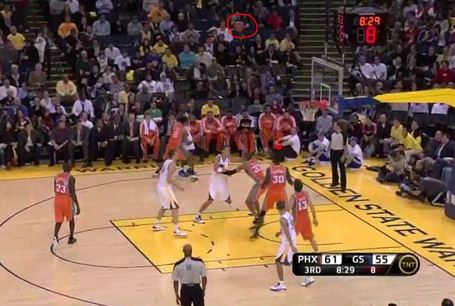 2) Barron got a hand on Lee to prevent him from streaking in while Grant Hill could also be seen face guarding the bigger Andris Biedrins. The box outs by Barron and Hill ensured Steve Nash got the easy rebound. These are the types of plays the Suns had been allowing to turn into offensive rebounds for their opponents. 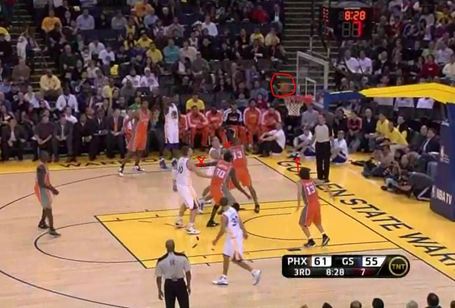 "We just want to try and continue to make a commitment on the defensive end. Keep working hard," Hill said after shaking off a foot issue. "We've had a good start to the month now, so we just need to focus on keeping that momentum going."

Channing Frye recorded 10 points and 10 rebounds in the win. Richardson is averaging 31.0 points in the last three games. Phoenix is 4-3 in the Valley of the Sun this season and will also host Washington on the short homestand.

This will be a good test for the Suns. It's a winnable game, but by no means a push-over. Indiana is playing well this season and the Suns, of course, will be tired from having played in California last night, while the Pacers are rested. It's important for the Suns to build momentum off the Warriors win and not take a step back.

Phoenix and Indiana split a home-and-home series a season ago, with each team holding serve as the host. The Suns are 9-3 in the previous 12 meetings with the Pacers, who have dropped 11 of their last 14 games in the desert.

The game tips at 7:00 p.m. local time and can be seen on Fox Sports Arizona. Fans can follow along with the game at Bright Side of the Sun's live game thread.