Share All sharing options for: Fiesta Bowl Preview: UCONN And Oklahoma Both Confident At Media Day

The UCONN Huskies and Oklahoma Sooners continued their Fiesta Bowl sponsored blitz tour of Phoenix. Today's activities started with media day for both teams. The entire squad from each school was bussed to the swanky Camelback Inn for a question and answer session with the combined interrogation powers of the local and national media.

Held in a giant ballroom, the teams were shuffled in with UCONN having the underdog honors of going first. The event kicked off with a presentation by a representative of title sponsor, Tostitos. The head coach was given a gift basket consisting of various bags of potato (and corn) chips as the corporate spokesperson solemnly -- and with a completely straight face -- stated that the snack food would help the teams' coaching staffs as they prepared for the big game. Seriously.

The next presentation was from the Vice Mayor of the City of Glendale who said some nice things about something or other and gave the coach from each team a giant gift basket with chocolate from local candy maker, Cerreta. In true political fashion, the Vice Mayor gave the same speech twice only changing up his final "Go Huskies" and "Go Sooners" closing as appropriate.

After the presentation of the chips and chocolate gift baskets that would have satiated the cravings of many pot-smoking college students, the coaches conducted a brief press conference while the various players were stationed individually at tables throughout that room. It was basically 30 minutes of media/player speed dating.

UCONN comes into the game with their primary offensive weapon full of confidence despite his team being a 17-point underdog. Junior running back Jordan Todman finished the season with 1632 rushing yards (143.1 / game) said it was a great feeling to be in the Fiesta Bowl and tossed aside any notions that the unranked Huskies didn't deserve to be in this game.

"It is like a smack in the face. We won the Big East and we are here rightfully," Todman said.

Oklahoma was heavily favored to win the last two times they were here and blew both game. They are confident that they are preparing properly to prevent the three-peat.

Running back DeMarco Murray talked about the Sooners uptempo and highly potent offense that averaged 36.4 points per game.

"We have a really good offense,"  Murray said.

Most of the Sooners players acknowledged they didn't know much about the Huskies prior to their preparation for this game. Defensive back Quinton Carter admitted that when he thinks of UCONN, the first thing that comes to his mind is women's basketball.

Players from both teams enjoyed gawking at the fancy Fiesta Bowl trophy. 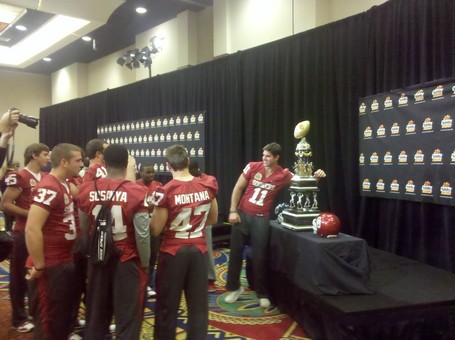 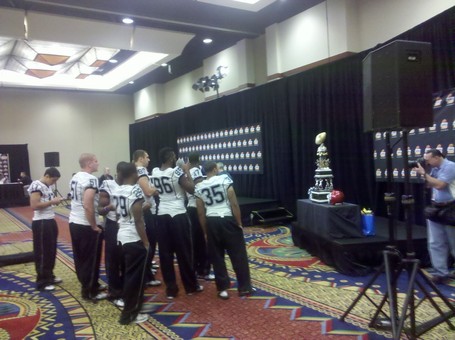