Fiesta Bowl: OU-UConn Is Major Mismatch, But Only On Paper

Share All sharing options for: Fiesta Bowl: OU-UConn Is Major Mismatch, But Only On Paper

Conventional wisdom says put all your money on Boomer Sooner. Unless Oklahoma has broken your heart in bowl games too many times. Which is entirely possible.

This time will be different, the Sooners say, and the stats would appear to back that up.

The No. 7 Sooners are 11-2 and the Big 12 champions. Their offense is so prolific (36.4 points per game) that they have two offensive coordinators, one of whom, Josh Heupel, won the national championship at quarterback for OU in 2000.

Actually, Heupel and Jay Norvell were named co-coordinators after former coordinator Kevin Wilson left to take the Indiana head coaching job earlier this month, but Heupel will call the plays from upstairs in a booth at University of Phoenix Stadium on Jan. 1.

The 25th-ranked UConn Huskies can only hope to contain Oklahoma with a defense that is the team's strength. UConn (8-4) won the Big East after losing its first two conference games, but turned around its season starting with a 16-13 win over West Virginia at home on Oc. 29.

The Huskies recovered four fumbles, including one near the goal line in overtime that set up the winning field goal. UConn went on to force 13 turnovers over its next four games, all wins, and won the Big East despite a three-way tie with West Virginia and Pitt, both of which UConn defeated.

Oklahoma will present both physical and mental challenges to the Huskies. Physical, because they haven't seen an offense like Oklahoma's all season. Mental, because UConn must overcome Curt Schilling's favorite entertainers, aura and mystique, that surround the mighty Sooners.

"Certainly they have a great tradition and it will be a huge challenge for us, but certainly we feel like we can compete," Huskies assistant head coach for defense, Hank Hughes, said Monday. "They get the ball to some different guys and they have quality depth.

"This is Oklahoma. You can tell who their players and coaches were 50 years ago. They have tradition. We have tremendous respect for them," Hughes added.

It's true, the Sooners have a tradition of winning with an all-time record of 809-303-53 and seven national championships. But if there's one thing that could be a great equalizer in a game like this, where one team is a heavy favorite (17 points) over the other, it's the Sooners' lack of success in BCS bowl games.

"Our kids understand," Heupel (see photo below) said. "They already have heard we haven't been too successful in BCS games.

"There's a lot of pressure just because you're playing in a big ball game. Our kids are excited about the opportunity." 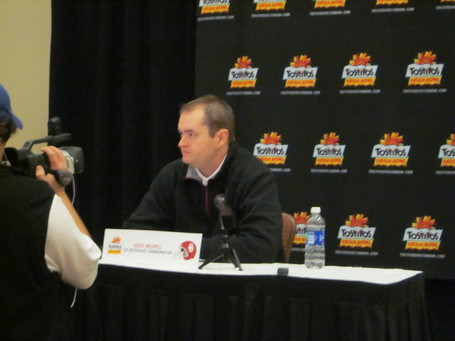 Quarterback Landry Jones is trying to treat the Fiesta Bowl like any other game, though he admits the team's run of misfortune in Glendale is in the back of his and his teammates' minds.

"Coach [Bob] Stoops talked about it. We all know what's happened against Boise State and West Virginia, "Jones said. "We're all ready to change that history for our team this year. They [the Huskies] need our utmost respect."