Share All sharing options for: Mascot Basketball: Always Good For A Laugh

Fans at the ASU men's basketball game Thursday were treated to some mascots playing ball. Also known as dudes (I think) under mascot outfits running around on the court trying to tackle another mascot or make a basket.

It was funny. I laughed. Who doesn't like seeing a dinosaur waddle down the court in pursuit of a ball he/she probably can't even see?

There was Sparky, D. Baxter from the D-backs, a giant drop of water, a "Recycle-o-saurus" (yay for being green!), a monkey from some branch of ASU and the smug-looking cow from Chik-Fil-A.

I had to take photos. I recall Baxter making a layup, but the best part was seeing the monkey just throw the ball in the air. The teams weren't fair.

What can I say? I like team or corporate mascots. Puddles the Oregon Duck is my favorite but there are plenty of good ones out there. Billy the Marlin from the Florida Marlins is funny, so are those racing D-backs legends. 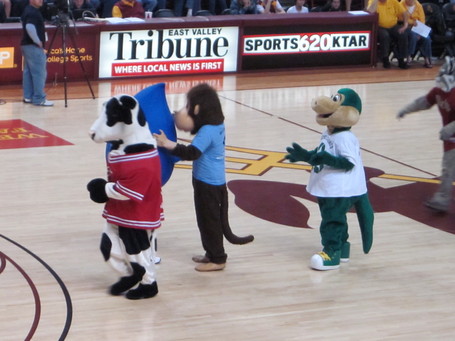