There's been a lot of talk about the ticket sales for this year's three Arizona college bowl games. By some reports, for example, the Iowa Hawkeyes are well behind expectations while other reports say that the Insight Bowl is expecting a record crowd despite the Iowa fans staying home in Iowa instead of coming to Phoenix and getting out of the snow for a few days. I guess they don't like nice weather or something.

And while the Fiesta Bowl matchup with UConn and Oklahoma might not be as thrilling as the BCS Title Game between Auburn and Oregon, prices are still up.

According to this chart provide by TiqIQ (full disclosure, SB Nation has a business relationship with TiqIQ) the average price for a ticket to the three Arizona bowls has risen from $121 last year to $378 this year.

The best deal in college bowl tickets is the Insight Bowl at about $114 average price while the average ticket cost for the BCS Championship game is running at $1674. 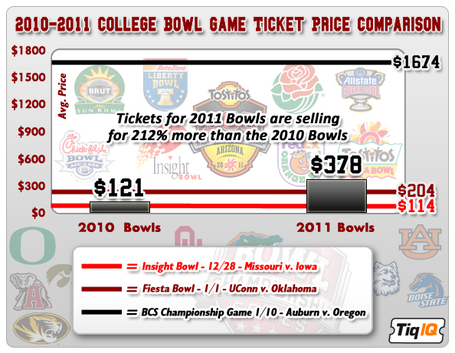 Click here for up to the minute ticket prices and the best deals.