I was fortunate to be cageside when Anthony Pettis unleashed one of the better sporting moments of the year. That fight changed the way I look at MMA.

I readily admit that I am no fan of MMA, but last night while covering the WEC 53 event in Glendale, I was sitting cageside for the Anthony Pettis "Showtime Kick." It certainly changed the way I look at the sport. What Pettis did in the final minute of the final round of a title fight against defending champion Ben Henderson will go down as one of the all-time great sporting moments I've ever witnessed.

Athletic competition is at its best when we see incredible things in incredible moments. There's a reason YouTube videos of buzzer-beating shots, walk-off home runs and Hail Mary touchdown passes are so popular. As sports fans, we are understandably attracted to amazing feats of heroism and what makes one shot or pass or hit better than countless others is the moment.

Last night, J.R. Smith had this incredible dunk, but it came in the first quarter of a regular season game that his team lost. That makes it a great play, not a great moment.

Sometimes, though, you are lucky enough to see one of these rare instances when both the timing and the caliber of the "play" combine to raise its status to legendary. That's what happened last night when Pettis unleashed his run-up-the-side-of-the-cage kick at just the right moment in just the right circumstance.

For more on those details (if you missed them) and what both Pettis and Henderson said about the kick, read this.

For me, MMA has always been just a bit too brutal and violent to really get into. I am not saying I am immune to the primal attraction that comes with people beating the crap out of each other -- that's ingrained in us males as much as the desire to stare at a fine-looking lady or the propensity to scratch one's self in the wrong place and time.

But just like with both of those other two, as you get older and you've seen more things, you learn to control such primal instincts. Personally, I've seen enough violence in my lifetime to last a lifetime, so for MMA to appeal to me it needs to be about more than dudes kicking the crap out of each other and that's exactly how I felt throughout the WEC 53 preliminary fights.

I suppose the promoters don't want boring matches between two lesser-skilled fighters during the under card, so it seemed like they created pairings designed to end quickly and brutally. The first four fights last night all ended in the first round with someone tapping out or getting knocked out.

In one case, a guy was lying on the ground with his face flat on the mat when the other guy rained down on him with two full-force vicious blows. In the next fight, Ken Stone got slammed on his back so hard by Eddie Wineland that he was out cold and didn't move for over five minutes. They strapped him to the back board and took him away. I don't need to see that, especially up close.

But then came the final fight of the night, which happened to be both a title fight featuring home-town hero and defending champ Ben Henderson and also the very last fight for the WEC before its absorption into MMA giant UFC.

I had a chance, by the way, to spend some time with Henderson a few days prior at a pre-fight event. Very cool guy and fairly knowledgeable about baseball and basketball, as well. I feel bad for him now that he's going to be "that guy Pettis kicked" for the rest of his life.

This was a battle between two obviously skilled opponents that were very evenly matched. Most people had the fight tied going into the fifth and final round and very close up to the point where Anthony Pettis threw the Hail Mary.

Click here for a round-by-round description of the amazing fight.

For Pettis to have both the skill to pull that off and the balls to attempt it at that moment was shocking. It obviously shocked Ben who seemed completely in awe of Pettis running up the side of the cage and, as a result, failed to block or dodge the kick that connected cleanly on his face and sent him flat on his back.

Henderson claimed he was never knocked out, but he was clearly stunned. You can see that in this picture taken just after the kick connected. 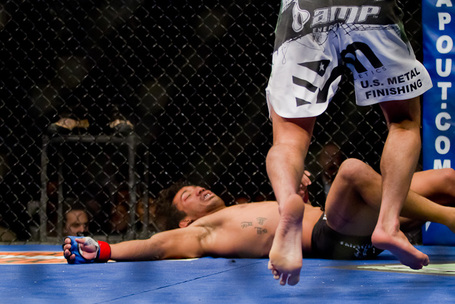 To his credit, Henderson never gave up and he managed to hold off Pettis long enough for the bell to ring. But that kicked ended any question about who would win the fight. Pettis walked out of the cage with the WEC Lightweight belt and a chance to fight for the UFC title in a unifying match.

Pettis' kick won't rank up there with Michael Jordan's shot over Craig Ehlo or Joe Carter's 1993 World Series home run. The stage was not that big and Pettis or Henderson are not those kind of stars. But for me, it will be right up there in my personal scrapbook of greatest plays and it certainly gives me a newfound respect for MMA.

In case you missed it, here's an animated gif of The Kick. But to really appreciate the moment, you need to watch the entire fight, which will be rebroadcast on Versus TV on Saturday at 9:00 p.m. Arizona time (or check Versus.com for listings).

SB Nation Arizona's full coverage of the WEC 53 event with recaps of each fight.