The main event is upon us. The last fight the WEC will ever hold. Lightweight belt on the line as hometown hero Benson Henderson squares off against Anthony "Showtime" Pettis. The crowd is raucous as Henderson enters the arena. Herb Dean is the referee. The two fighters circle each other early, Pettis with a bounce in his step. Henderson throws the first shot but nothing lands. Both men are taking their time, gauging the distance.

The crowd loudly chants "Ben! Ben! Ben!" as Henderson shoots in a nails Pettis with a right hand. Henderson clinches with Pettis, holding him against the cage. Pettis scrambles to get free, but Henderson trips the challenger to the ground and ends up on top. Pettis briefly attempts to grab an armbar but Henderson has none of it. Henderson backs out and Pettis stands up. Pettis lands a front kick that stumbles Henderson. Henderson rushes in and secures another takedown, standing and working from top as the round ends. SB Nation Arizona scores the round 10-9 for Henderson.

Round two begins and both fighters look fresh. Pettis throws a right hand but misses. Pettis lands a right hand square and Henderson hits the floor. Pettis tries to jump on the opportunity but Henderson works his way back to the feet. Henderson clinches with Pettis against the cage briefly, then lets it goes and backs away. Pettis throws a head kick but is blocked. Henderson closes the distance, scrambles, and clinches with Pettis against the cage. Henderson lands a few inside knees, and backs away. Henderson lands a solid kick to the midsection. Pettis attempts a flying knee in retaliation but misses. Pettis accidentally kicks Henderson in the man parts, and action is briefly stopped. Henderson throws another head kick that is barely blocked by Pettis. The round ends as both men circle the cage. Close round, could go either way. SB Nation Arizona scores the round 10-9 for Henderson.

Round three begins and the two fighters instantly engage. Henderson lands a few body kicks right into Pettis' ribs. Pettis closes the distance and trips up Henderson. Pettis scrambles and takes Henderson's back. Henderson stands but Pettis is hanging on. Henderson is resting against the cage, essentially carrying Pettis. The crowd rallies behind the hometown fighter, chanting "Ben! Ben!". Pettis is landing shots to Henderson's ribs from his position. Henderson grabs an arm but Pettis responds with a face shots to Henderson's face. Pettis looks up at the clock as he hangs on. Henderson relentlessly throws elbows against Pettis' thigh. As the round ends, Pettis releases his grip and attempts a head kick, but misses. SB Nation Arizona scores the round 10-9 for Pettis.

Round four begins and both fighters are cautious, throwing shots form a distance. Henderson rushes in and flurries. Henderson shoots in and takes Pettis to the ground. In the ensuing scramble, Henderson takes Pettis' back and sinks in a rear-naked choke. Somehow Pettis fights it off, works, and manages to reverse the position. Pettis takes Henderson's back as the hometown favorite stands and carries the pair to the side of the cage. They clinch briefly before releasing. Front kick from Henderson. Another kick but Pettis responds with a stiff shot to the head. Henderson shoots for a takedown, but Pettis stuffs the shot. Pettis grabs Henderson's neck and almost locks in a guillotine. It's not quite in and Henderson fights it off. The round ends as Pettis continues to try to tighten his grip. SB Nation Arizona scores the round 10-9 for Pettis.

Round five begins as the crowd erupts. Whoever wins this round wins the fight. Henderson flurries and shoots in but is stuffed. Pettis lands a stiff leg kick, but it grazes Henderson's crotch. Once the action resumes, Henderson lands a sharp body kick but eats a right hand from Pettis. Pettis shows off some Ali-style footwork. Henderson slips and falls but the two stand back up. Henderson shoots in for the takedown but Pettis sprawls. Henderson tries again and gets it this time. Shouts of "Smooth! Smooth! Smooth!" echo from the crowd. Henderson takes Pettis' back. Pettis rolls and reverses the position. Pettis stands up, Henderson follows suit.

One minute left and the round is still up for grabs. Pettis somehow lands a flying head kick off the cage that floors Henderson. Pettis smothers Henderson who is clearly stunned. Henderson stands and charges forward only to eat a knee that put him back on the floor as the round ends. Amazing final minute by Pettis. That kick was straight out of a kung-fu movie. SB Nation Arizona scores the round 10-9 for Pettis. 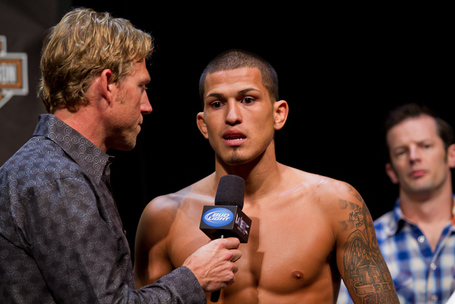