It is a historic night here in Phoenix with Dominick Cruz facing Scott Pettis. This fight is unique, as the winner walks away with not one, but two titles -- the WEC Bantamweight belt and the inaugural UFC Bantamweight belt. A spot in the pages of history on the line tonight as these two men make their way into the cage.

The crowd is fired up as the contestants touch gloves. The fighters circle the cage, gauging the distance. Cruz lands an early right hand jab. Jorgensen responds with a left hand. Cruz just nicks Jorgensen with a head kick. Cruz closes the distance, landing a nice combination. Another right hand from Cruz. And another. Jorgensen shoots the distance and presses Cruz up against the cage.

Cruz releases and the two back up to the center of the cage. Cruz lands two leg kicks in succession. Another leg kick followed by a stiff jab. Cruz unloads another combination, ending with an uppercut that just grazes Jorgensen. Cruz is throwing a ton at the challenger but nothing is landing flush. Jorgensen rushes in and clichés against the cage. Cruz pushes off the cage and a scramble ensues. Jorgensen takes Cruz down but Cruz reverses to end up on top as the round ends. SB Nation Arizona scores the round 10-9 for Cruz.

Round two begins and the two fighters instantly meet in the center of the cage. Jorgensen shoots in but the takedown is stuffed. Cruz lands a sharp jab before backing away. Cruz lands another jab, and another. Jorgensen can't seem to close the distance. Cruz is keeping his hands down, and showing fabulous head movement. Cruz shoots in and secures the takedown. Cruz hammers Jorgensen with the left hand, trying to free the right hand that Jorgensen has trapped. Jorgensen scrambles and gets his back up against the cage.

Two minutes remain as Cruz is staying busy from the top. Cruz lands two elbows to the top of Jorgensen's head. Jorgensen can't work himself free from Cruz's smothering wrestling. Jorgensen scrambles with thirty seconds left and manages to stand. Cruz lands a stiff shot against the cage but Jorgensen responds with a hard kick. The round ends as the two back away from the cage. SB Nation Arizona scores the round 10-9 for Cruz.

Round three begins and Cruz resumes where he left off, throwing a stiff jab in the face of Jorgensen. Another right hand sends Jorgensen to the floor but he instantly stands back up. Cruz is mixing up his shots and keeping Jorgensen at a distance. Cruz is dodging everything Jorgensen throws at him with superb head movement. Cruz unloads a combination on Jorgensen, the last shot landing flush.

Jorgensen throws a shot but Cruz dodges and lands a solid counter straight. Jorgensen rushes in but Cruz spins him off-balance and takes him down. Jorgensen sweeps and finds himself on top, before immediately standing up. Cruz misses a jab as the round ends. SB Nation Arizona scores the round 10-9 for Cruz.

Cruz scrambles and almost gets Jorgensen's back before the two fighters stand back up. Cruz continues to mix up his shots; his head movement seeming to baffle Jorgensen. Cruz shoots in and secures another take down before the round ends. SB Nation Arizona scores the round 10-9 for Cruz.

Fifth and final round of this championship fight. Jorgensen needs to do something drastic. Cruz misses early with a head kick. Jorgensen is trying to push the pace but Cruz is avoiding everything thrown at him. Cruz lands a nice counter uppercut but Jorgensen moves forward. Cruz is keeping Jorgensen at a distance with sharp kicks and jabs. Cruz lands a nice combination as Jorgensen moves back. Cruz's hands are down and there is a notable bounce in his step. Jorgensen shoots and secures the takedown. Cruz stands back up and circles away. Cruz explodes in and secures yet another takedown.

Jorgensen just can't seem to deal with Cruz's wrestling. The crowd lustfully boos, upset that Cruz may be riding out a decision. Cruz is keeping busy from the top as the round nears its conclusion. Jorgensen scrambles and stands back up, only to eat a flying knee from Cruz. The two fighters have one last exchange as the final horn sounds. SB Nation Arizona scores the round 10-9 for Cruz. 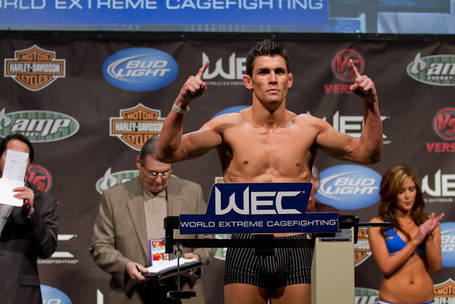