The crowd is finally starting to fill out as the second bout of the main card begins. This is the first televised bout of the evening. Shalorus matches his unbeaten record against Palaszewski's four fight win streak; something's got to give. The two circle around the cage to start the match.

Round two begins as Palaszewski breathes in deeply. The two again trade kicks. Shalorus swings wildly and misses. Palaszewski just misses a head kick. Palaszewski tries again and Shalorus catches the leg. The two circle the cage. The crowd is growing restless at the inaction.

Palaszewski strikes hard with a leg kick. Sharlous again swings wildly with an overhand right. The two exchange blows in the pocket and Palaszewski catches Sharlous with a stiff jab. Palaszewski circles and almost lands a massive head kick. Palaszewski throws a front kick to keep the distance. Sharlous shoots for the takedown and lands in Palaszewski's guard. The crowd boos as the fighters remain on the ground.

Shalorus edges Palaszewski closer to the cage and postures up. The two stand. Palaszewski slips and falls but re-catches his balance. Round two ends under a chorus of boos. SB Nation Arizona scores the round 10-9 for Shalorus.

Round three starts. Palaszewski needs to do something drastic to steal this. The tempo has picked up as the two exchanges punches. Shalorus swings wildly with an overhand right, following by a nice combination. Palaszewski lands two quick left jabs to the head of Shalorus. Shalorus changes levels and shoots but Palaszewski catches the takedown and lands a knee. Palaszewski lands a solid head kick.

Shalorus again shoots in, and this time he secures the takedown. Palaszewski is frantic from the bottom, knowing that he is running out of time. Shalorus lands a few hammerfists from the top. Palaszewski pops back up and Shalorus looks tired. Palaszewski lands a knee to Shalorus' head. The crowd is getting behind "Bartimus". Ten second left as Palaszewski shoots for another knee, but misses. The round comes to a close under a chorus of boo's. SB Nation scores the round 10-9 for Palaszewski. 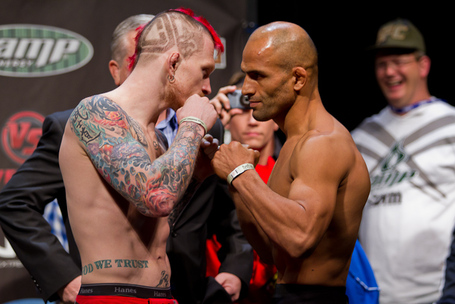