Share All sharing options for: Oregon Ducks Get New Nike Uniforms For BCS Game, Of Course

The Oregon Ducks are sometimes considered "Nike University" thanks to the generous donations of the Nike founders who happen to be University of Oregon alumni. Those financial ties have certainly not hurt the Ducks when it comes to recruiting and hence on-field performance. Oregon will be coming to Arizona for this year's BCS Title Game and once again -- thanks to Nike -- they will be sporting new uniforms.

Sporting News reported that that the Ducks, along with Boise State and TCU and Florida, will be getting new Nike football uniforms in time for bowl season. Here's the picture that SN ran on their web site: 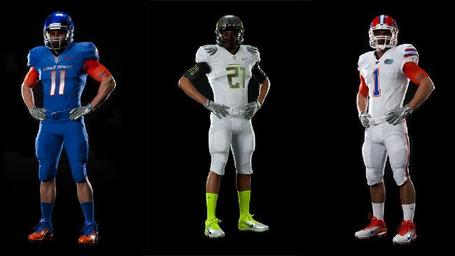 New uniforms, which can also be seen in this image tweeted by CNBC's Darren Rovell, are nothing new for the Oregon Ducks. They got a new set of colors just last year in 2009. Here's a description of the old-new uniforms from July 2009 via Nike Blog.

All in all, the new uniforms are 25% lighter and have a more "shrink-wrapped fit." The jerseys alone have been reduced from 7.46 ounces to 5.5. And of course, in keeping with past years, the Oregon Ducks players had a great deal of input on what would and would not go into the 2009's new Oregon Ducks football uniforms.

All in all, the players will have 80 different uniform combinations to choose from each Saturday.

What highly ranked recruit wouldn't want to go play there?

The new uniform appears to be similar to the old with the addition of more florescent yellow color included in the mix. We are thrilled to see the duck feathers are still present on the shoulders. Without feathers on the shoulders how could the Ducks be expected to fly free?

The Oregon Ducks will face Cam Newton and the Auburn Tigers in the BCS Title Game in Glendale, AZ on January 10, 2011. No word yet if the Tigers (or perhaps Cam Newton's dad) have been able to shake down their uniform sponsor for some new threads in time for the big game.