Trail Blazers' Brandon Roy Will Play Through The Pain, With An Attitude

Share All sharing options for: Trail Blazers' Brandon Roy Will Play Through The Pain, With An Attitude

The Portland Trail Blazers' All-Star guard has been hampered by a troublesome left knee that he said had to be drained of fluid twice this season. Roy was in in enough discomfort last month to ask the team to limit his minutes.

In response, coach Nate McMillan is trying to get up to 35 minutes out of Roy each night. Friday night in Phoenix, however, Roy played almost 41, and the Blazers needed every one of them.

Roy hit the biggest shot of the game, a 12-foot jumper with 1:06 left to play that gave Portland an eight-point lead and effectively sealed the Blazers' 101-94 win over the Suns. He made 10 of 19 shots and and led all scorers with 26 points.

"He said he was feeling good," McMillan said after the game. "He wanted to play and so it's five minutes over where it should be, but it was a good game. We needed him."
The Blazers certainly did. No starter played fewer than 33 minutes Friday on the second night of a back-to-back.
"We still want to keep his minutes under 35 and tonight [Friday], just due to the game and the way the game was going, we were a little bit over," McMillan added.
Roy, 26, is clearly not the same fun-loving player he was coming out of the University of Washington when he was named NBA Rookie of the Year in 2007. He's been an All-Star three times, but that was before his right knee began to ache toward the end of last season and his left knee started bothering him this season.

At this point, Roy is just trying to block out the pain and play. On Friday he said the whole limited minutes thing is over. And the once ever-present smile of a young star has been replaced by a veteran-like scowl of determination.

"I just wanted to play. I'm kind of done with the whole minutes thing ... So I just told Jay [Jensen, trainer] 'Let's just open it up and start playing. No more monitoring. Told Coach [McMillan] it was over."

Roy said he wants to be more aggressive and more focused. He's ignoring critics and is trying to will himself to playing more minutes. The smile is gone because Roy is in pain, but he also has higher expectations of himself despite his limitations.

Roy used to be a slasher who somehow got to the rim though the movement seemed methodical. He's not taking the ball to the basket nearly as much now, not drawing many fouls, not going to the free throw line. But the scoring touch isn't completely gone.

He won't completely acknowledge that his aches and pains won't allow his body to do what it used to. He shrugs off that notion by saying he won't worry about it anymore.

Roy seeks to be more assertive on the court. He's taken on a "me-against-the-world" mentality.

"This is serious. Yeah, I got an attitude, if that's how you want to put it." 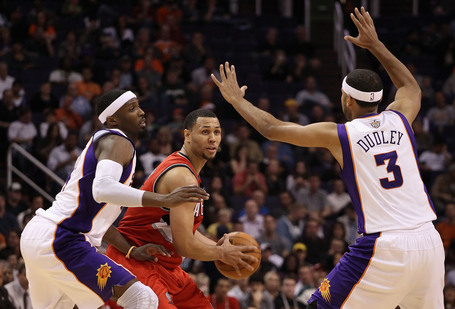