NBA Digital is almost ready for the new season. Almost.

The 2010-2011 NBA season starts tonight, which means NBA Digital has reached deadline day for their iPhone/iPod Touch/iPad applications, as well as their other in-season desktop and mobile options. In the software business, we call this a fixed-time deliverable.

Considering the rough edges and missing pieces in the zero-day offerings, the NBA Digital chief might have been on the phone with David Stern last week asking if the first few games tonight actually had to count. Maybe they could be extra bonus preseason games? Just one more day?

Sadly for them, the Boston Celtics and Miami Heat players told their mothers that tonight was their big opening night and no one likes to upset a Mom. Therefore, the initial pieces of the NBA's next-generation consumption options have the feel of a rolling start to the season.

League Pass Broadband appears to be the most mature of the options available to the technoballer, having changed little from an end user standpoint since last spring. Of course, both TNT games are blacked out tonight since NBA Digital is a joint venture between Turner Sports and the NBA.

TNT is separately running something called NBA TNT Overtime (because that's totally a name to say out loud to your friends) for the Celtics/Heat, which appears to be similar to TNT's online NASCAR offerings during the races they broadcast and MLB's Postseason.tv capabilities. In those cases, audio feeds are available, as well as multiple camera angles and DVR-ish abilities. These work best, of course, as an adjunct to paying for cable. Sneaky, sis.

Since the third game is local to Phoenix, that one is banned from local desktops, as well. Thankfully, both Phoenix and Portland have over-the-air access to those games tonight, but that won't stay true throughout the season as most Trail Blazers and Suns games will appear on local cable outlets.

In the marathon to get all their products out by today, NBA Digital didn't quite hit the tape at full speed. After hinting this summer at an iPad offering for League Pass Broadband access, Opening Night starts with only a free iPhone application. 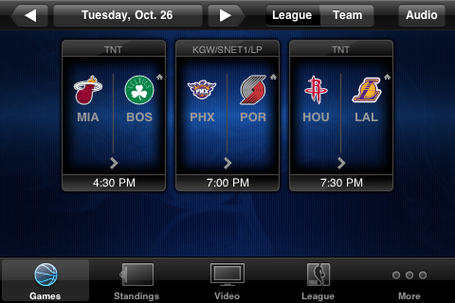 An iPad application is in the pipe like their much-lauded Game Time Courtside app from last season; the Wall Street Journal reports the iPad version will arrive weeks from now. From various press releases, it appears the NBA is still committed to the Android platform, but a new Game Time app has not been released there yet.

There are two options for accessing live video for games from your iOS device: pay $45 (early bird pricing!) on each device your family owns through an in-app purchase or shell out $110-180 (early bird pricing!) for the whole League Pass Broadband package, including mobile device access. Also, you may be eligible for all the goodies below if you already paid for League Pass through Cablevision, Cox, or Dish Network. Contact your local provider or local NBA for more details.

A new user might not understand this all falls under the NBA Triple Play moniker unless they read the pseudo-press release, meaning the kind folks at NBA Digital technical support will have a few long nights at the start of the season. If you do purchase the League Pass Broadband online, download the iPhone Game Time application, and then log into the Triple Play account using your League Pass Broadband account -- you're on your way.

Unfortunately, it's not possible to review the quality of the video over 3G connections or using WiFi because (wait for it) all of tonight's games are banned in the Phoenix market. Barring another drive to San Diego, that will have to come another day. If MLB's initial experience with live mobile video is a useful baseline, expect this to be a work in progress through New Year's.

If the three outs of the Triple Play are the television, desktop, and mobile viewing options for League Pass, then the new social media integration (called NBA Turnstile) is like a Bengie Molina cycle: potentially amazing yet awkwardly implemented.

Building on the MLB At Bat application's functionality, users can check in at the arena via Foursquare and Gowalla to register for virtual badges and eventual tangible rewards. You can also check in virtually as well if you're merely consuming the game through a media partner.

There's also a chatter zone empowered by Twitter and Facebook where you can trade quips with other fans of your team or the night's opponent. Currently, the NBA has embraced the freedom of social media and allows naughty words to appear. It's unknown how long that will last. 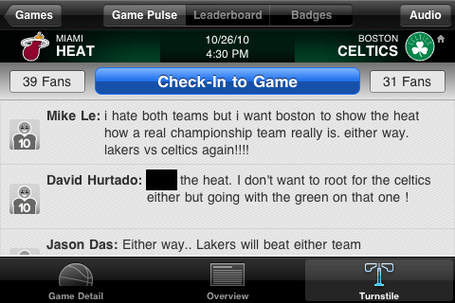 You can use your Facebook account to log into all these social media features, but those shameful few without Facebook have to sign up with the NBA's social media partner, Fanvibe. Of course, you can't use your Triple Play account to sign up, so be prepared to tote around a bagful of logins if you really want to explore the studio space on this app.

All the checkboxes in the press release have been marked by the development team, but the sandpaper still needs to be run over the edges a few times for users to enjoy Game Time.

For example, the application confirms when you've logged in with your League Pass/Triple Play account with a dialog box. However, it still nagged twice to see if a purchase of the $45 in-app League Pass was desired before the message went away. Adding to the confusion, the app doesn't show you that it remembers your Triple Play account.

Also, it calls the Triple Play account the Three Point Play account, possibly reflecting a last-minute branding decision that didn't filter all the way through the development and marketing processes.

None of these items are high-priority to users, except possibly understanding the best way to give the NBA your money. However, they don't provide full confidence quite yet.

So if you're ready for multi-platform consumption of NBA product in any daypart through a selection of deployment devices, the NBA is right behind you. Like, by three weeks or so. Go ahead and get started without them. They'll be right there. Have the cash ready when they arrive.