The Cardinals Want To Destroy Tailgating In Favor Of Money

Share All sharing options for: The Cardinals Want To Destroy Tailgating In Favor Of Money

First the Arizona Cardinals owner Bill Bidwell gives $10,000 to fight against marijuana for sick people (wink ;) and now this news from the Phoenix Business Journal...

The City of Glendale, home to the Cardinals and the soon to be empty arena where the Coyotes used to play if they don't get off their council chairs and do something ...

... approved a zoning change that allows the Bidwell family to turn the parking lots around the Cardinals' stadium into hotels and parking garages**.

Have you ever tried to tailgate in a parking garage? 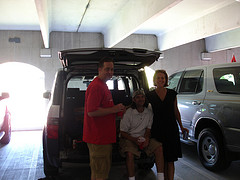 Talk about the No Fun League.

Now, compare that to this traditional tailgating outdoors. 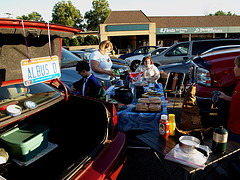 Okay, sure. They are tailgating the release of a Harry Potter book in the parking lot of the book store, but they are still outside! So much better.

There's only one true way to express the moral outrage at a decision that puts profit over people's right to get drunk and eat too much grilled food and chips outside before a football game.

Take it away Joni Mitchell...

**Small note: The development isn't planned for another 25 to 40 years by which time Max Hall will have been elected to the Hall of Fame and sworn in as President of the United Worlds and cars will fly to the stadium and park in vertical towers reaching 2 miles into the air.

The Cardinals probably won't have a Super Bowl ring though, so the intrigue will still be there.